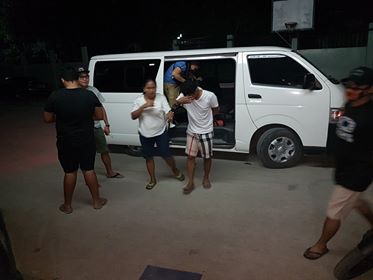 Drug suspects Miper Lopez, 35, and Jude Agustin Labrador, 24, are brought to the PDEA-7 headquarters following their arrest in Barangay Busay, Cebu City on Feb. 21, 2019. They were caught with about P1 million worth of shabu. |CDND Photo/Benjie Talisic

Jude Agustin Labador, 24, and his female companion, Miper Lopez, 35, were arrested after they sold drugs to an agent of the Philippine Drug Enforcement Agency in Central Visayas (PDEA-7).

The two were later found to be in possession of a total of 150 grams of white crystalline power believed to be shabu (crystal meth) with a street value of P1 million, according to a PDEA-7 agent involved in the operation.

Leah Albiar, spokesperson of PDEA-7, said they learned of the illegal drugs operation of Labador from another drug suspect previously arrested by the agency.

Labador is a resident of Barangay Tipolo, Mandaue City while Lopez lives in Sitio Abocado, Barangay Mambaling, Cebu City. The two were together to conduct the drug sale when the PDEA agents pounced on them.

Albiar said Labador  was placed under surveillance for some time before he took the bait of selling an undisclosed amount of  shabu to a poseur buyer at their designated meeting place, a waiting shed, in Barangay Busay./elb