Thompson, Warriors get back on track, beat Hornets 121-110

The Warriors took a 1 ½-game lead over the Denver Nuggets in the race for the best record in the Western Conference. Golden State dropped its previous game, a home loss against Houston on Saturday night. 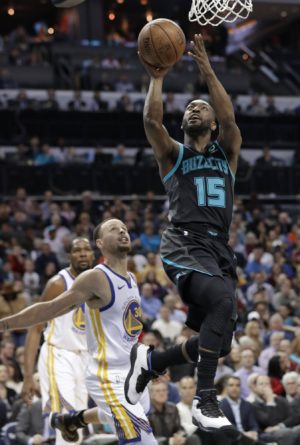 Kevin Durant had 20 points and seven rebounds for the Warriors, who have not lost back-to-back games since Dec. 27. It was an off night for Stephen Curry in his return to his hometown, finishing with 16 points on 4-of-14 shooting from 3-point range.

Cody Zeller made 13 of 14 shots from the field and finished with a career-high 28 points to lead the Hornets, who have lost two straight.

After trailing by 17 during the fourth quarter, Charlotte clawed within seven with 3:24 left before Curry stole a pass and fed Thompson for a fast-break layup. Curry sank a 3-pointer with a minute left and raised his hands to show his relief.

It was a frustrating night at times for the Warriors.

Durant air-balled a 3-pointer and got blocked on a dunk attempt by Cody Zeller on the same possession. A few minutes later, Curry gathered a pass on a backdoor cut, went up and was blocked by Marvin Williams. In the fourth quarter, Cousins received a technical foul when he threw Jeremy Lamb’s shoe, which had fallen off, out of the lane.

The Warriors shot 50 percent from the field and held the Hornets to 44 percent.

Read Next
‘Mano Mano’ exhibit: Elevating fashion to the field of arts