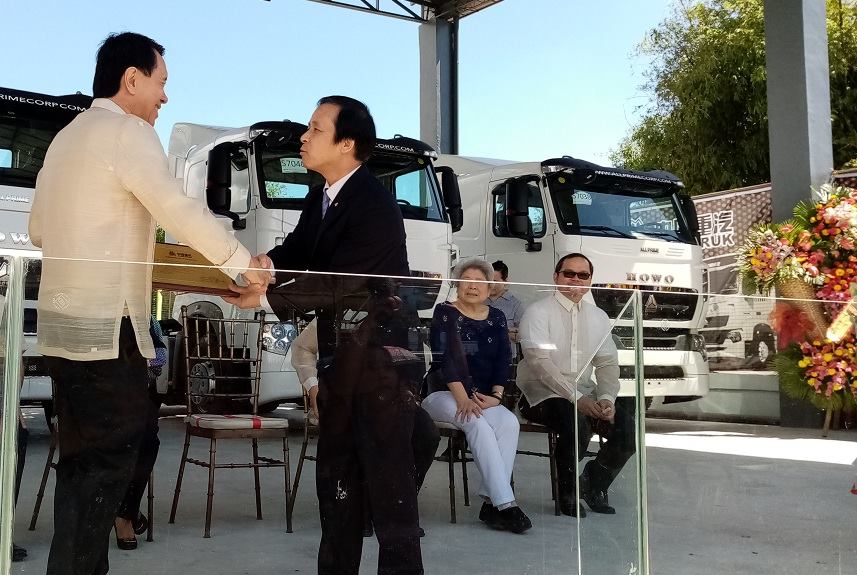 Sinotruk international president Zheng Xu Yang turns over commission of authority to All Prime International Motor Corp. Chairman Oscar Chua that signifies that it is the only Visayas-based distributor of Sinotruk’s heavy duty trucks. | Photo by Irene Sino Cruz

MANDAUE CITY—Chinese heavy truck manufacturer Sinotruk has named All Prime International Motor Corp. as the only authorized distributor based in the Visayas.

Zheng Xu Yang, Sinotruk international president, explained that their company chose All Prime International because the latter has a very good sales team and after sales service personnel.

“We see All Prime as Sinotruk’s strategic partner,” Yang said in an interview with the media.

He noted that Cebu is considered a logistics hub, in terms of shipping.

Sinotruk formally gave the commission of authority to All Prime for the distribution of Sinotruk brands, parts and expansion of marketing operations in the Visayas during the inauguration of All Prime’s sales and service center along UN Ave., Mandaue City held Friday.

According to All Prime President Andrew Lim, the partnership with Sinotruk would assure their customers of factory-specified light to heavy trucks that would be supported by quality service and original parts direct from the factory.

Lim said that Sinotruk has provided All Prime with a system that would track the inventory of spare parts so that they would always have these available if needed.

He also expressed optimism that Sinotruk brand trucks would be the preferred brand because these were two to three times lower in price while comparable in quality to other brands.

“We look forward to working with businesses from all over the Visayas,” Lim said, adding that they also project an expansion in their businesses.

All Prime chairman Oscar Chua noted a growing demand for quality heavy-duty trucks as well a reliable parts and service due to the infrastructure build up and booming construction in the country.

“We see the opportunity in this business and the area by which we will be able to complement the industry,” Chua said.

Speaker Gloria Macapagal Arroyo, who graced the inauguration of the All Prime facility, noted that Cebu, with its dynamism and entrepreneurial spirit, would continue to be a major contributor in the economic growth of the Philippines.

Arroyo expressed confidence that with All Prime handling the distribution, Sinotruk would become the biggest selling heavy duty truck in the Visayas.

The blessing and inauguration of the All Prime facility was also graced by Consul General Jia Li of the People’s Republic of China in Cebu, Mandaue Rep. Jonas Cortes, Vice Mayor Carlo Fortuna, Ambassador Frank Benedicto, All Prime Vice President Tony Tan, All Prime President Andrew Lim and other All Prime officers./dbs