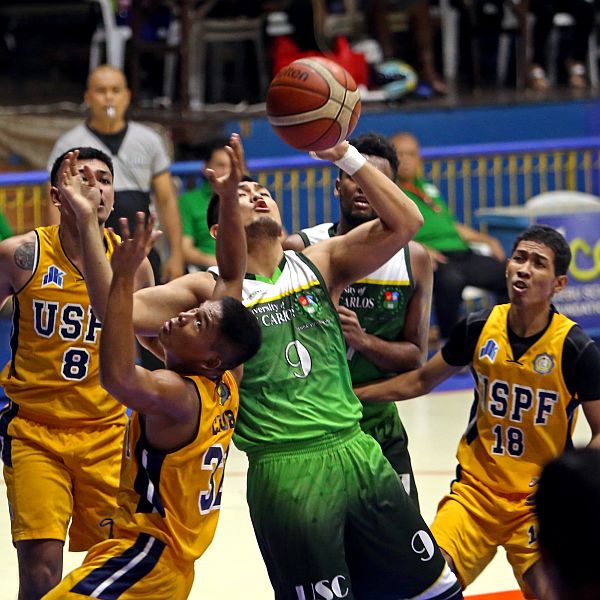 USPF’s Rodelio Cauba and USC’s Malcolm Tan get tangled in this 2017 photo of a Cesafi seniors basketball game. USPF and USC will meet for the City of Naga Intercollegiate basketball crown. | CDN file photo

Cebu City, Philippines — The University of Southern Philippines Foundation (USPF)  Panthers and the University of San Carlos (USC) Warriors set up a championship showdown as they booted out their respective opponents in the semifinals of the 1st City of Naga Intercollegiate Basketball Tournament on Sunday, March 10, 2019, at the Enan Chiong Activity Center.

USPF shocked last year’s Cesafi runners-up, the University of San Jose-Recoletos (USJ-R) Jaguars, 75-69, while USC handed the University of Cebu (UC) Webmasters a 93-77 thrashing to advance to the finals, which will be held on March 17, 2019.

He also got plenty of help from the likes of Karl Langahin, Rich Managor, EJ Villarta and Graggy Sarahina, who combined for 34 points.

USJ-R, which no longer has former MVP Jaybie Mantilla and Mythical Five forward RJ Dinolan, was led by Nichole Ubalde, who had 19 points, and incoming sophomore, Elmer Echavez, who tallied 13 markers.

In the other semis game, Kurt Trangia paced the Warriors in scoring with 23 points while Justine Jules Langres put up 15.  Roosvelt Jelianggao and Froilan Mangubat each tallied 14 points for the team of head coach Bong Abad.