House, car up in flames mar start of fire month 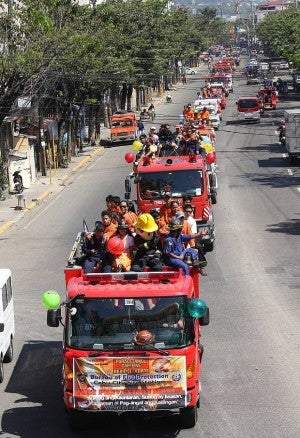 A fire truck leads a column of emergency vehicles in a citywide motorcade yesterday kicking off the month-long celebration of Fire Prevention Month. (CDN PHOTO/JUNJIE MENDOZA)

At past noon, a fire destroyed a Mitsubishi Adventure AUV  along the South Road Properties (SRP) in Cebu City.

Perly Antiola, the owner of the AUV, told Cebu arson investigator Lowel Opolentisima, that she was cruising along the SRP  when she noticed flames coming out near the steering wheel.

Antiola said she stopped the vehicle, got out near the Sugbu building, and then called the the fire department for help as flames spread and engulfed the vehicle.

Opolentisima said the fire was probably caused by a defective electrical system of the vehicle.

Opolentisima said the fire happened at 1:30 p.m. Calzada’s neighbors helped prevent  the fire from spreading by pouring pailfuls of water on the fire in Calzada’s living room.
Opolentisima estimated the damage to Calzada’s house at P1,000.

The arson investigator said the fire could have been caused by a spark from an electric outlet.

Earlier at 9 a.m., the BFP kicked off its campaign marking the start of the Fire Prevention Month.

Regional Director Ma. Luisa Hadjula of the BFP-7 led the opening activities of the celebration with the  “Walk for a Fire Free and Fire Safe Nation” in Cebu City.

These included a motorcade of Cebu City  firemen in their fire trucks with sirens on with their fireman mascot riding at the lead vehicle.

“Marami naman kaming mga activities pero kada taon mas pinaigting namin ito. We may not totally eradicate fire but at least we can prevent it,” she said.

These include the distribution of information material, lectures about fire prevention, inspection of establishments in the city, testing all fire hydrants, fire disaster control and emergency evacuation plan, and fire drill.

There will also be a house-to-house fire safety inspection for single and two dwellings.

There will also be a three-day open house of all fire stations where they will invite schoolchildren and conduct lectures.

Hadjula also said that they are looking for ways to address the problem of lack of equipment of firemen.

She said officials of Daito-shi, Osaka, Japan had invited them to Japan next week so that they could choose the fire-fighting equipment that Daitoshi officials would donate.

According to the BFP, there is an increase of fire incidents in Cebu for the months of January and February this year with 114 fire incidents as compared to the same period last year with 61.

Read Next
Regine Velasquez is still on fire