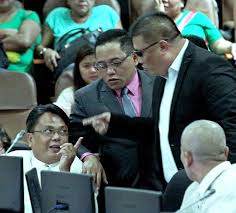 Cebu City Councilor Alvin Arcilla (left) is set to file a motion to ask Comelec’s First Division to reconsider the order for his disqualification from the May 13 election. /Cebu Daily News file photo

CEBU CITY, Philippines—Cebu City Councilor Alvin Arcilla will be asking the Commission on Elections (Comelec) en banc to reconsider the issuance a resolution for his disqualification from seeking reelection in May by the Comelec’s First Division.

Arcilla said that the First Division’s  resolution dated March 15, 2019 is not yet final.

Arcilla told Cebu Daily News Digital in a phone interview today, March 24, that the Bando Osmeña Pundok Kauswagan (BOPK) legal team is already preparing the motion for reconsideration which they will file before the Comelec en banc as soon as he receives a copy of the order for his disqualification.

Arcilla is hopeful that the en banc will be able to see through the case and allow him to continue with his candidacy.

The Comelec First Division ruled that Arcilla “is ineligible to run as (a) Member, Sangguniang Panlungsod, in the First District of Cebu City having been elected and having served, in the same position for three (3) consecutive terms immediately prior to the 13 May 2019 NLE (national and local elections).”

The First Division affirmed the complaint filed by a certain Allen Canoy who argued that since Arcilla was elected for three successive terms in 2010, 2013 and 2016, he retained his title and position even if he was barred from exercising his position because of the issuance of a suspension order against him.

Arcilla was among the city officials, who were ordered suspended in 2016, for granting and availing of the P20,000 calamity assistance which the administration of former mayor Michael Rama released to victims of the October 2013 earthquake and Super Typhoon Yolanda which happened the following month.

But for Arcilla, his suspension barred him from completing his second term in office from 2013-2016, and thus, allowing him to seek a fresh mandate in the May 13 midterm elections./dcb