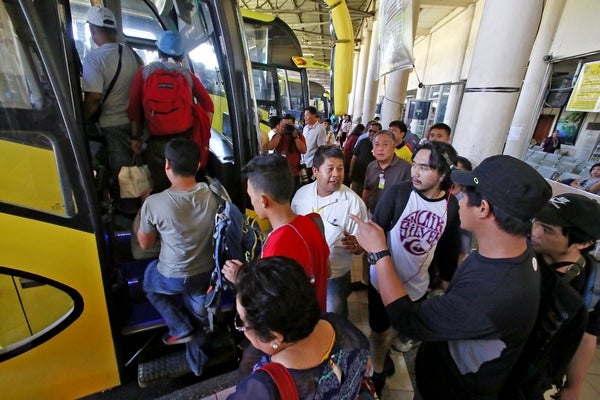 CEBU CITY, Philippines — Anticipating the possible shortage of buses to ferry passengers back home to the countryside during the Holy Week celebration, the management of the Cebu South Bus Terminal (CSBT) is planning to tap the use of government-owned buses to augment the commercial buses.

But first, there is a need for them to seek the permission of the Commission on Elections (Comelec).

Terminal Manager Jonathan Tumulak said that he will be writing Comelec, through the Provincial Legal Office, to ask for opinion and permission on the usage of the Local Government Unit (LGU)-owned buses to ferry passengers who may be left stranded at the terminal starting on Holy Wednesday, April 17.

(We only have 300 buses inside the terminal. If we look at a 24-hour operation, this will not be enough.)

Basing from their experiences in their last three years, countryside passengers would crowd the terminal starting on Holy Wednesday to catch a trip back home to their provinces.  It is also the last working day of the week for most of the private and government offices.

In 2018, Tumulak said they recorded a total of 411,780 passengers from Holy Monday to Easter Sunday. The most number of travellers reaching 68, 400 was observed on Holy Wednesday.

Tumulak said that the 300 buses that they now have at the terminal is not enough to cater to the high demand for Holy Week travels.

“We are asking the opinion of the Comelec if we can tap the LGU-owned vehicles.  If we can remember, during the All Saints and All Souls Day observance last year, we asked the LGUs to deploy (their) vehicles to ferry the stranded passengers that were headed for their respective towns,” he said.

Tumulak made a promise that he will police the deployment of LGU-owned buses to especially make sure that these will not be used in the town officials campaigning.

(We will impose prohibition on the display of political tarpaulins inside the buses. We will also prohibit the deployment of town representatives who will be wearing T-shirts or blazers with candidates faces or names on it.)/dcb