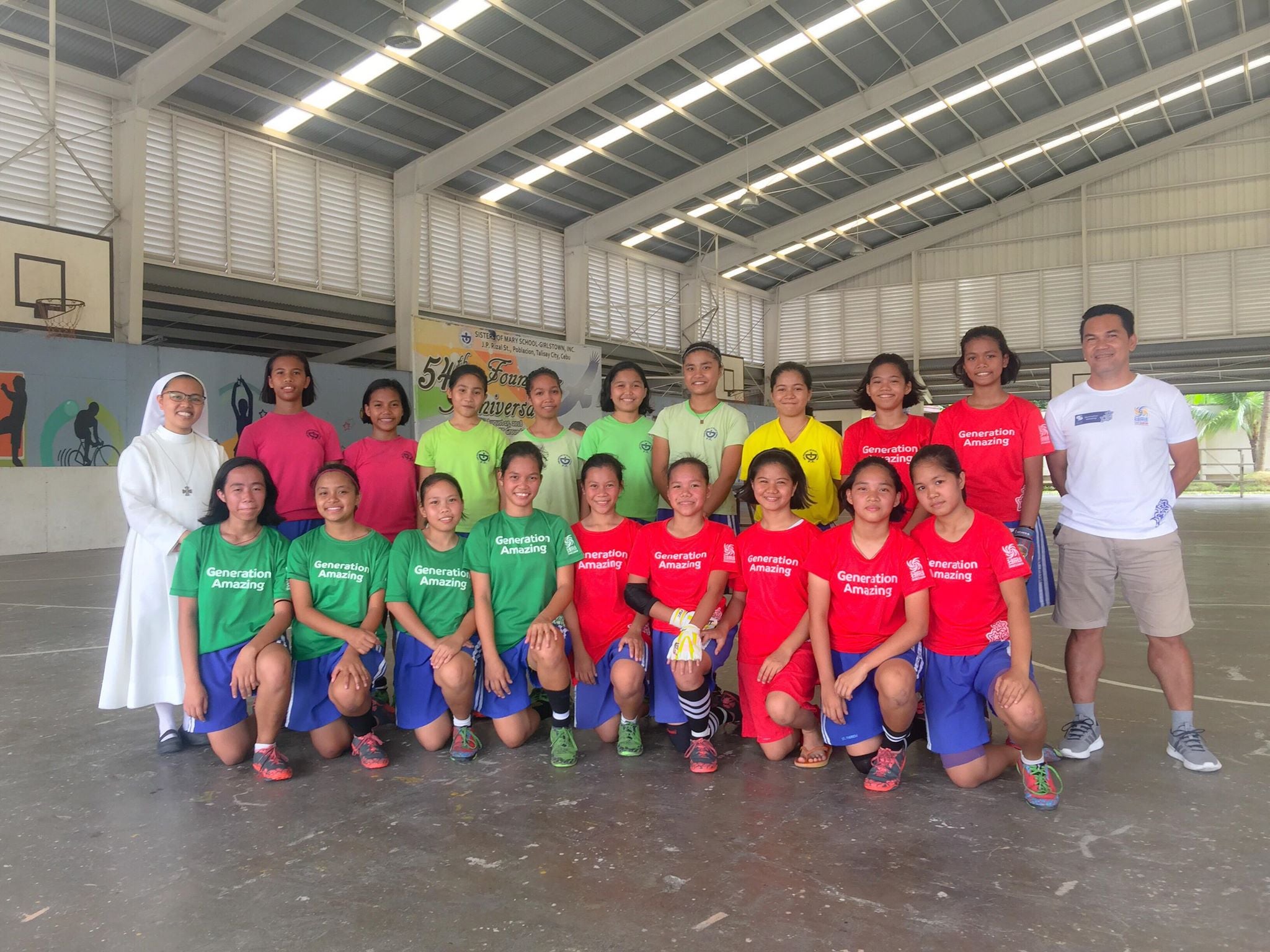 The Sisters of Mary School Girlstown futsal team will be one of the teams competing in the GCL-Cebu Summer Futsal League this May. With them are SMS Girlstown principal, Sr. Laresa N. Morasa and one of their coaches, Gaudito “Jun” Taneo. CDN Digital photo | Mars G. Alison

CEBU CITY, Philippines —Following its launching last December, the Girls Community League (GCL)-Cebu will continue its goals of empowering girls for gender equality and social inclusions through futsal and football by holding its first league—the GCL-Cebu Summer Futsal League in May at the Sisters of Mary School (SMS) Girlstown in the City of Talisay, Cebu.

This GCL-Cebu summer league, which will have categories Girls 17 Born 2002 and 2003 and Girls 15 Born 2005 and below, is organized by Fundlife International with its local partner, the Giuseppe Football Club (GFC).

Games will be played every weekend this summer.

“We want the girls’ teams to be intact. We want them to be consistent with their training and not just form a team when there are festivals or tournaments. The GCL will keep these teams together since the league will run for a few months. This will give the girls a sense of commitment, consistency and belonging,” said Rachel Genco, one of the GFC founders.

So far, 10 teams have confirmed their participation in the Girls 15 and nine in the Girls 17. These are Maslog, Danao City, Southcrest, GFC Capitol, Guardian Strikers A and B, SMS Girlstown, Kamagayan, Canduman, Tayud FC and Shaitan FC for Girls 15. And, Maslog, Danao City, Lycans Football United, Southcrest, Guardian Strikers, SMS Girlstown, Tayud FC, Abellana National School and Zapatera for Girls 17.

For its initial tournament, teams invited are mostly those that are community-based and public school teams in and out of Cebu City since they are the ones who have no regular access to games, equipment, on-going mentorship, access to real-life role models and the delivery of real-skills and employability training.

Teams must have a maximum of 10 players and a minimum of five to play 15 minutes each side for a total of 30 minutes per match in a single round robin. The team winning the most number of games will be declared the champion.

Champion teams will get trophies and medals.

Aside from Cebu, the GCL is also already set-up in Tacloban.

The GCL is a dedicated education and empowerment programme that uses football and futsal  to provide access to play, role-models and opportunity for vulnerable girls in the Philippines. The goal is to reach 21,000 players nationwide by 2021. /bmjo