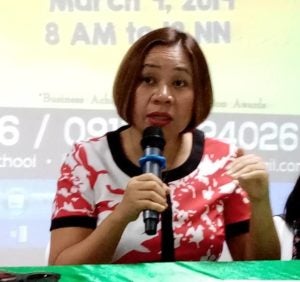 CEBU CITY, Philippines — After earning a degree in Accountancy and succeeding in the corporate world, her concern and passion for teaching children made her shift gears.

Marivic Bathan, founder and president of the Children’s Paradise Montessori School (CPMS), said that her decision to build the school came after her niece, who was born with cerebral palsy, made her realize that child would need special education.

So she decided to open a pre-school.

She recalled that it was in 2001 when she made a turning point to build CPMS with the money she saved from early retirement as an executive of a leading beverage and softdrinks company.

“I also pooled resources from family members and friends, who believed in me, and started the opening in 2006,” said Bathan.

According to Bathan, CPMS, which is now on its 13th year, had been continuously getting enrollees because of their “unconventional teaching” which was pattered after the Dr. Maria Montessori’s Montessori method of teaching.

Bathan said that CPMS is a child-centered school, a departure from the traditional and conventional teaching method.

“Here at CPMS, we focus on what the child is good at, teaching them through their senses because we wanted to be ‘child-centered’,” said Bathan.

She said that their experiential approach in teaching using Montessori designed materials for their students had set them apart from the rest of the schools.

Example, their kindergarten pupils, she said were already proficient in mathematics.

Their Grades 2 and 3 students could already solve Algebra while their Grade 6 pupils already knew geometry because they had adopted a system that was at par with Singapore Math.

Singapore Math is a kind of teaching method used for kindergarten through the sixth grade. It has become popular due to Singapore’s consistent top ranking on the international assessment of student Math achievers, which was then called Trends in International Mathematics and Science Study (TIMSS).

The CPMS applies the Montessori curriculum, which is an international curriculum.

She said that part of this approach would omit the use of textbooks and would opt the use of reading materials and other references since textbooks would limit the development of a student.

“If ang bata ganahan makat-on pa sa topic na gidiscuss, we encourage them to research because the use of textbooks only limits them,” said Bathan.

Bathan also said that students would also be spared from doing homework, and instead of having periodic exams, each would be required to do practical tests to determine their competencies and mastery of the subject.

“In the classroom, we integrate our students who have special needs, and and we individualize and personalise the teaching, having a ratio of 1 teacher for 15 children,” she added.

With this, Bathan said that their teaching staff had been mostly composed of Special Education (SPED) teachers, who specialized in the Montessori style of teaching.

Bathan herself also has a Masters in Montessori Education and has advanced training abroad.

It is CPMS’s aspiration and plan to eventually send some of its Management Team abroad for further training and eventually set up their own Montessori training Center in Cebu.

CPMS started with 13 students in 2006 and had increased their population through the years.

Currently, they now have 150 students. CPMS has also been considered as the Most Trusted Montessori School in Metro Cebu by the Global Management and Excellence Awards (GLOMEA) Council.

Aside from that, CPMS has been recognised for 10 straight years now since 2010 as Cebu’s Montessori of the Year by the Business Achievement and Recognition Awards (BARA) Council.

Bathan said that her passion for children was influenced by her parents and her niece who was the driving force in building CPMS.

As they are currently making their move to expand, by 2021 CPMS will then have environment-friendly and green buildings and will offer junior high school programs.

Looking back, Bathan had indeed started from the roots up to building what had been truly a school that had been suitable for the development of a child, a dream that was made into reality out of her perseverance and her passion for children.