The Philippine Statistics Authority (PSA) recently reported the country’s official poverty statistics for the first semester of 2018. This report provides the estimates of poverty incidence using income data from the first visit of the Family Income and Expenditure Survey (FIES) conducted in July 2015.

The report says that in the first semester of 2018, a family of five needed no less than PhP 7,337, on average, to meet the family’s basic food needs for a month. This amount is the food threshold, which would amount to P44,022 in the first half of 2018 for the whole family of five or P8,804 per capita.

On the other hand, no less than PhP 10,481, on average, was needed to meet both basic food and non-food needs of a family of five in a month. This amount is the poverty threshold, which again would amount to P62,886 in the first half of 2018 for the whole family of five or P12,577 per capita.

These are 10.9 percent higher than the food and poverty thresholds from the first semester of 2015.

Food threshold is the minimum income required to meet the basic food needs, satisfying the nutritional requirements set by the Food and Nutrition Research Institute (FNRI) to ensure that one remains economically and socially productive.

On the other hand, poverty threshold is the minimum income required to meet the basic food and non-food needs such as clothing, fuel, light and water, housing, rental of occupied dwelling units, transportation and communication, health and education expenses, non-durable furnishing, household operations and personal care and effects.

The poverty report on the firsts of 2018, however, should not be confused with the incoming report around October, which will present the official poverty data in the country based on the first and second visit of the 2018 Family Income and Expenditure Survey. The first half of the year report was based only on the first visit.

The two reports, therefore, will differ greatly as shown in the following table on the country’s poverty thresholds among the Filipinos for years 2006, 2009, 2012, and 2015 with the corresponding poverty incidence computed for each year. 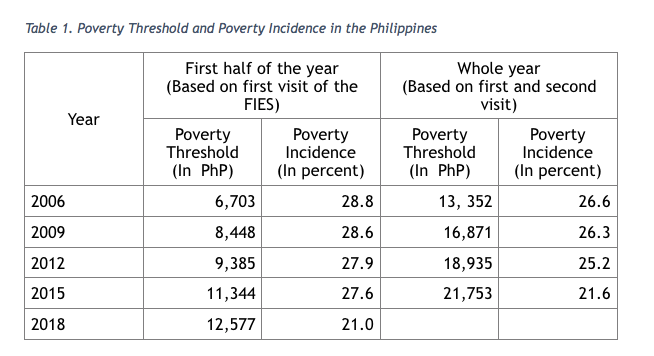 In the Duterte plan, the 21.6 percent poverty rate among population based on the first and visit of the 2015 FIES is to be cut down to 14 percent by the end of his term.

We will know what the 2018 full year poverty rate will be once it is released by PSA in October yet. With that, we know if the target is on tract.

One thing sure though is that it will be quite different from what had just been released based in the first visit alone of the 2018 FIES.

What about the hell being raised that the food and poverty thresholds used by the PSA are unrealistic?

Well, that should be answered by the PSA!