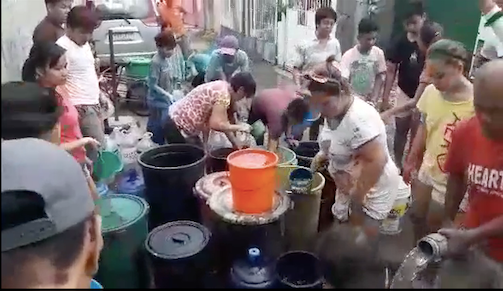 Some Cebu City barangays like Barangay Sambag in Cebu City that are affected by the low water supply can call Cebu City’s hotlines, so that their barangays can be supplied with water by the local government. | CDN Digital file photo

CEBU CITY, Philippines — The Cebu City government has opened hotlines to cater to the residents living in areas where water supply is dangerously low.

Councilor Dave Tumulak, the deputy mayor on police matters and public order, said the hotlines would serve the people, who would like to report the lack of water supply in the area.

Upon calling the hotline, the caller must provide their barangay and area so it can be noted and a water distribution schedule will be provided to the caller afterwards.

Tumulak said he convened with the City Disaster Risk Reduction Management Office (CDRRMO), Bureau of Fire Protection (BFP), and Metropolitan Cebu Water District (MCWD) to create a plan to provide water to at least 31 affected barangays with low to no water pressure.

Tumulak said they had to address the water problems of the 19,800 households, which are also consumers of the MCWD.

He said they already assigned 40 fire trucks and water tanks to the affected barangays. The water will be delivered simultaneously every 9 a.m. to 3 p.m. daily.

Tumulak said they also identified the fire hydrants that they could use to gather water so this would not affect the water pressure of the nearby areas.

Mostly, the fire trucks will be taking water from the Mactan Rock since it still has enough water supply.

Tumulak encouraged the barangays to prepare the residents an hour before the arrival of the fire trucks in order to have an orderly distribution.

Tumulak said the hotline will be open until the end of the El Niño when the water level is expected to normalize. /dbs