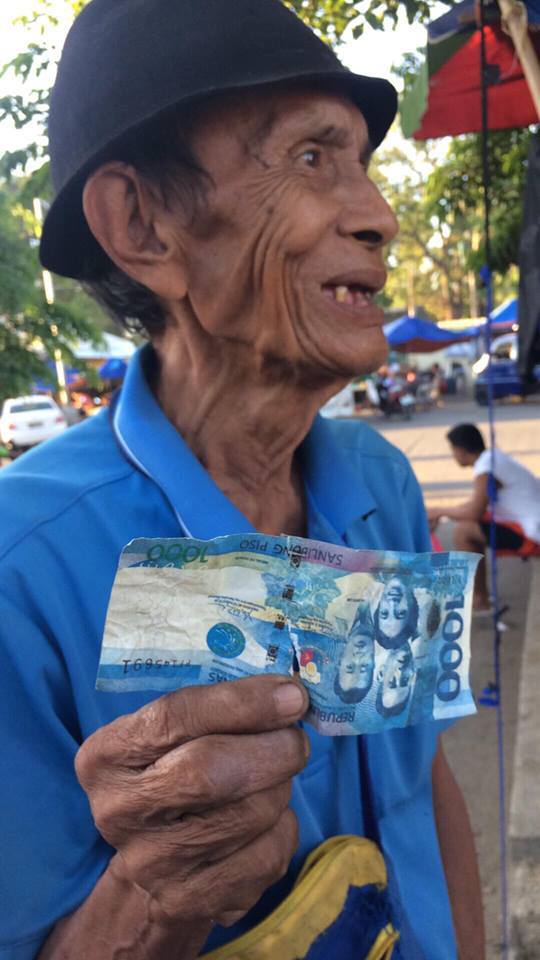 Solomon Alfante, 76, a fruit vendor at the New Market in Minglanilla town shows the fake P1000 bill that a person used to buy fruits from him. Alfante lost P900 to that person. | Contributed photo

Cebu City, Philippines— Netizens showed their outrage and disgust to the person who duped a 76-year-old fruit vendor with a fake P1000 bill to buy the vendor’s bananas on a fine early morning of Easter Sunday in Minglanilla town in southern Cebu.

The netizens were reacting to post on Facebook showing a bewildered old man holding up a fake P1000 bill to another netizen, who took a photo of it and uploaded it on Facebook.

The netizen told the story behind the photo with the old man, who turned out to be Solomon Alfante of Naga City, being duped by a man who bought a P100 worth of bananas with a P1000 bill.

Alfante gave a change of P900 to the man, who told him that he would leave the bananas he bought because he had yet to buy something inside the market.

When the man did not return, Alfante checked the P1000 bill again and found out that it was fake.

After posting the pictures, the other netizens were quick to react and comment on the incident. Most of the comments showed disgust and outrage.

(The one who did this had no heart or compassion. He duped a person who could only make a small profit [of the fruits he sells])

(I hope karma would get that person.)

And Apol Gacasan commented how sad she was upon learning about the situation of the vendor.

(This man has no heart that he even preyed on the poor. Even if his victim is an old man, who struggled to survive by selling fruits.)

The incident happened in at 6 a.m. on April 21 at the New Market in Minglanilla town.

Read Next
Unique Easter Traditions All Over the World