Comelec: Cops have discretion where to set up checkpoints 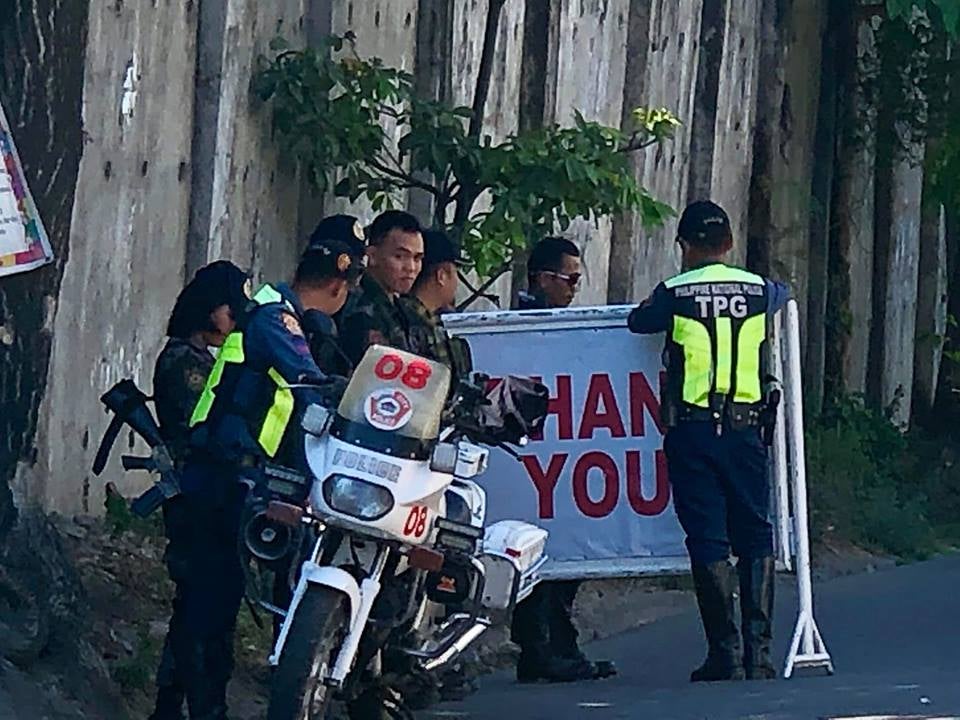 Cebu City police set up a checkpoint outside of the Guadalupe residence of Cebu City Mayor Tomas Osmeña. /Photo from Osmeña’s FB page

CEBU CITY, Philippines — The police have the discretion on where to establish checkpoints.

Amid questions on the establishment of a checkpoint near the residence of Cebu City reelectionist Mayor Tomas Osmeña, the Commission on Election (Comelec) clarified that the local police would have the discretion to decide when and where they would set up checkpoints.

Lawyer Marchel Sarno, elections officer in Cebu City’s south district, said in a phone interview on Sunday, April 21, that the police would only inform the local Comelec office if they would be conducting a checkpoint in line with the enforcement of election laws.

“It is usually the discretion of the police where they will conduct the checkpoint because they know supposedly kung asa gyud dapita mas effective. In fact, ang ila rang buhaton is to inform the Comelec kung asa silang dapita nagconduct og checkpoint,” said Sarno.

Osmeña posted on his Facebook page about the checkpoint manned by the Cebu City Mobile Force Company (CMFC) outside his home in Barangay Guadalupe. The mayor claimed that the police were allegedly tailing him even when he joined the Visita Iglesia on Maundy Thursday.

“The main road, where there is actual traffic, is 50m away from here, but they have set up outside my house in full battle gear, just far enough to avoid the CCTVs,” Osmeña’s latest post on the issue reads.

“Some people in the kapilya (chapel) across my gate tell me the police photograph whoever enters and exits my house. When I left earlier today, they left. Now that I’m home, they’re back,” the post added.

Although he could not ascertain if the checkpoint conducted by the CMFC is in line with the Comelec checkpoints for the upcoming May 2019 midterm elections, Sarno said the city police had coordinated with their office for a checkpoint along Doña Modesta Gaisano Street in Barangay Guadalupe in Cebu City.

Sarno also explained that aside from the Comelec checkpoints, the police could continue to operate their own checkpoints.

“Ang nainform sa ako kay sa Modesta sa Guadalupe. Transfer-transfer man gud na ang checkpoint. As I was informed by [Colonel Royina] Garma during our meeting before, ang checkpoint is 24 hours na siya, and every [police] station, they conduct og at least one checkpoint in a day which lasts for about one to 2 hours,” Sarno explained.