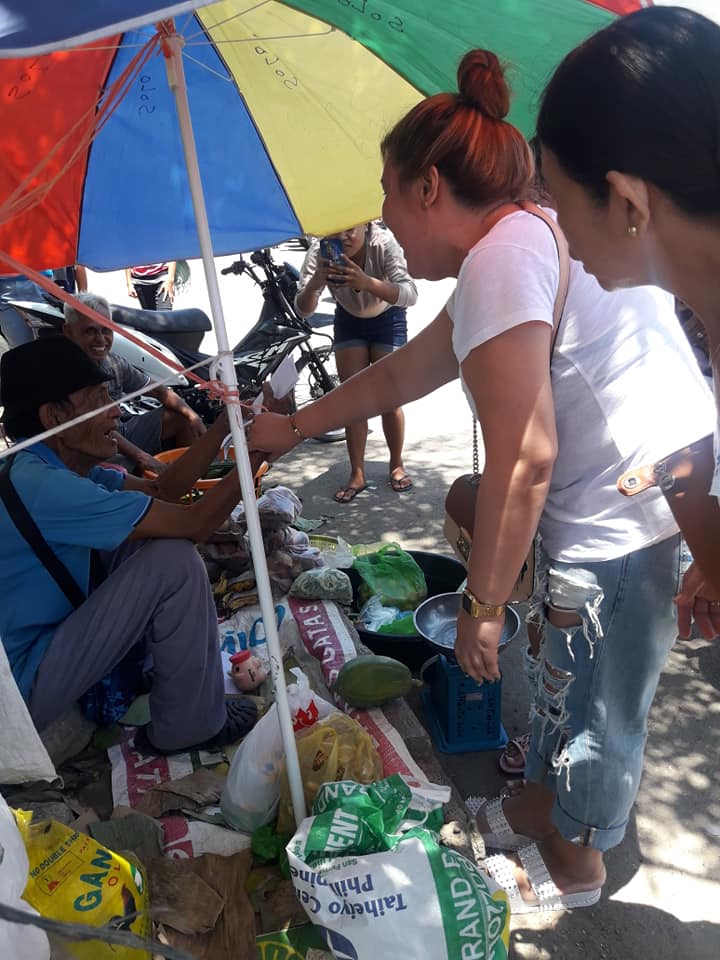 Kind-hearted individuals have been visiting Solomon Alfanta at the Mingalanilla public market since Sunday to offer help to the old man. /Contributed Photo

CEBU CITY, Philippines—Solomon Alfanta, 76, lost his Sunday morning earnings from selling fruits at the new Minglanilla public market to a man who duped him with a fake P1, 000 bill, but he received so much more from netizens who took pity of what happened to him.

Netizens visited Alfanta at the public market to offer help after reading his story from another netizens Facebook post.

(A good man will always get more than the amount that he lost. Solomon Alfanta, 76, is a banana vendor who came form the mountains of Naga (City) and now sells at the new Minglanilla public market. He was duped earlier today (Sunday). After a concerned citizen posted the incident (on social media), several kind-hearted individuals already came to help him.)

Gimena also posted photos of those who visited Alfanta to offer help which included a sack of rice, cash and food.  Her post generated 17, 000 engagements; 6, 100 shares and 63 comments as of noontime today, April 22.

(He is very happy with all the help that he received. As of now, I’m still with him (Alfante) to make sure that a relative would fetch him and accompany him home to ensure his safety.)

(Many came to help. I know God has a reason why this had to happen to you because he wanted more people to come to help you the best possible way. You are already old and should already stay home to relax.

“God bless u more and more tay. God is always watching you. Thank u so much sa tanang nitabang,” Gimena added.

Princesz Sherica Crismundo Tamang said that “Maka pahuway na jud c tatay of pila ka buwan ana (he will now be able to rest for a few months after all the help that he received).”

(I’m  trying to hold back my tears. I felt pain in my heart while I was reading (social media posts on) what happened. Thanks to you because you were one of those who immediately sent help.  God will be the one to repay you.) /dcb