Interested to “fly” to Mars? Here’s how you can score a boarding pass… 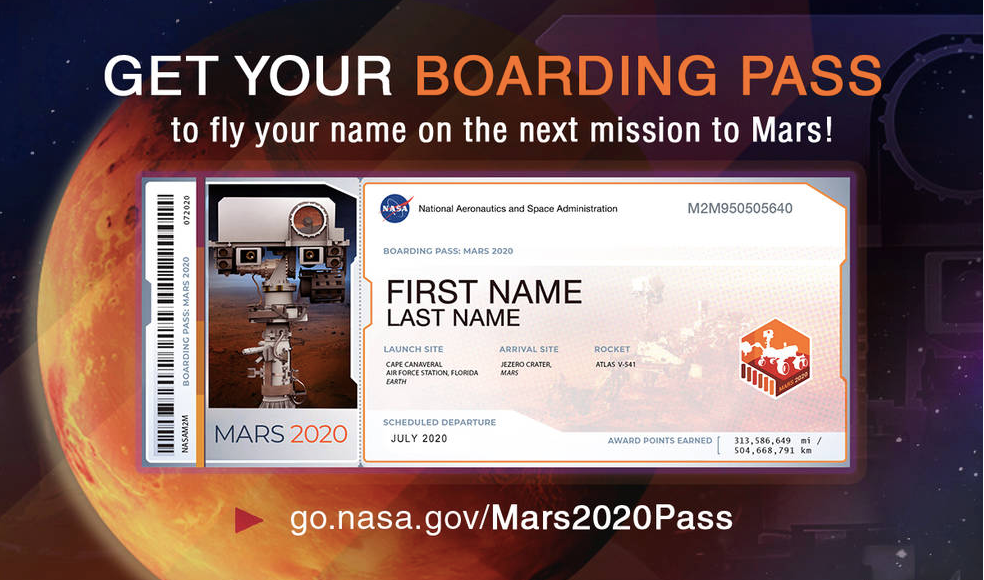 Or at least have your name stenciled in chips and ride with the United States’ National Aeronautics and Space Administration (NASA) Mars 2020 Rover on its first round trip of the red planet.

NASA has announced a campaign that gives the public the opportunity to send their names to Mars with the rover, which the space agency described as a robotic scientist “weighing more than 2,300 pounds or 1,000 kilograms.”

According to NASA, the rover “will search for signs of past microbial life, characterize the planet’s climate and geology, collect samples for future return to Earth, and pave the way for human exploration of the Red Planet.”

NASA’s Mars 2020 rover is scheduled to launch on July 2020 at the Cape Canaverial Air Force Station in Florida. It is expected to land on February 2021 on the Jezero Crater of Mars.

NASA said that the Microdevices Laboratory of their Jet Propulsion Laboratory (JPL) in Pasadena, California, will use an electron beam to stencil the submitted names onto a silicon chip with lines of text smaller than one-thousandth the width of a human hair (75 nanometers).

“At that size, more than a million names can be written on a single dime-size chip. The chip (or chips) will ride on the rover under a glass cover,” says NASA.

The Mars 2020 and other missions are done to prepare for what NASA calls as the “human exploration of the Red Planet.”

NASA also announced the return of American astronauts to the moon.

“As another step toward that goal, NASA is returning American astronauts to the Moon in 2024. Government, industry and international partners will join NASA in a global effort to build and test the systems needed for human missions to Mars and beyond,” says NASA.

If you want to “jon” this historic mission, simply go to https://go.nasa.gov/Mars2020Pass to register your name.

Listing one’s name in the mission comes with a souvenir boarding pass and “frequent flyer” points.

The boarding pass can be downloaded and printed. / celr

Read Next
Mango desserts and treats for the weekend