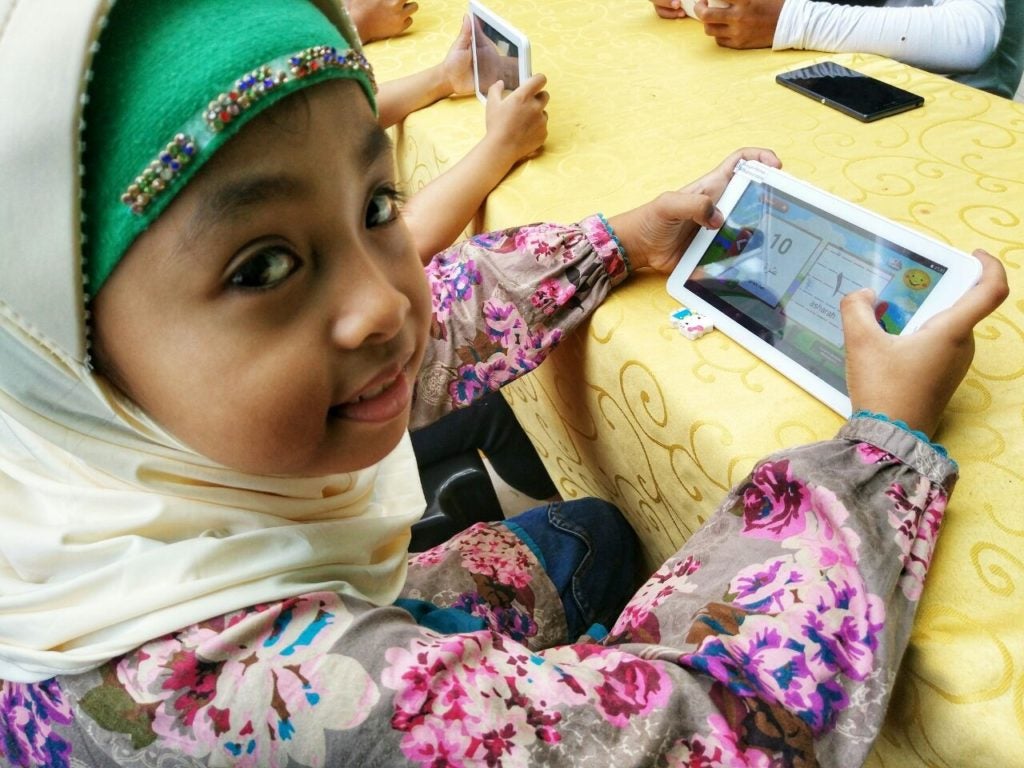 The LearnSmart mother tongue-based literacy apps that teaches school children lessons on local alphabet and numbers, among others, have been shortlisted in the 2019 Asia Mobile Awards./Contributed Photo

Smart is in the running for its #LearnSmart Mother Tongue–Based Literacy Apps that were developed in partnership with the Department of Education (DepEd) and academic institutions nationwide. The PLDT subsidiary initiated the local content development program in 2018 as a response to the lack of interactive local content for education and is the only finalist from the Philippines among the 50 contenders shortlisted by the AMO.

The apps are nominated under the category of Outstanding Mobile Contribution to the UN SDGs in Asia. Other finalists include edotco Myanmar for Sustainable Connectivity Solution, China Mobile, Huawei Technologies & The 301 Hospital for The World’s First Successful 5G-Enabled Remote Surgery on a Living Human Patient, KaiOS for the emerging OS, KT & UNEP for Air Map Korea, and Mahindra Comviva for AsiaHawala.

The presentation of the Awards will take place at this year’s Mobile World Congress – Shanghai from June 26 to 28, 2019.

First of its kind

The LearnSmart mother tongue-based literacy apps feature lessons on local alphabet and numbers, videos showcasing local stories and songs, and games that help develop a learner’s essential memory and thinking skills. The mobile tools were designed to be interactive to make teaching and learning basic literacy in the local language more interesting and encouraging for both the teachers and the learners.

To-date, Smart has launched nine #LearnSmart literacy applications: Bahay Kubo (Filipino), Kaalam (Cebuano), Ta’allam and Tahderiyyah (Arabic), Matisalug (Matigsalug indigenous peoples Tribe of Davao and Bukidnon), Kaaram (Waray), Katao (Inabaknon), Singsing (Kapampangan), and Sanut (Ilokano). To-date, the suite of apps are the only mobile tools in the Philippines that feature localized educational content. In the case of Matigsalug, it is the first tribal app of its kind in the country, while Tahderiyyah is the first literacy app for the Bangsamoro children.

The main delivery pipeline of the apps are through the Smart School-in-a-Bag program, which are portable digital classrooms that are donated to remote and underserved schools in the Philippines with intermitted to no power. With more than 110 learning packages deployed as of end-2018, over 30,000 students around the Philippines have been given the opportunity to improve their performance in school though Smart’s flagship education initiative.

Aside from School-in-a-Bag beneficiaries, anyone can also download the #LearnSmart apps for free via Google Play.

Prior to being named as a finalist in AMO 2019, the roster of mother-tongue literacy apps was previously awarded by the Public Relations Society of the Philippines with Silver citations at the 54th Anvil Awards. The nods were for Best PR Program Directed at Specific Stakeholders and Best PR Tool – Mobile Application.

Now on its fourth year, the AMOs recognize game-changing mobile devices and technologies, to applications and services developed for, or available in Asian markets, showcasing the ever growing value that mobility brings to users, industries, businesses, communities and economies across Asia’s countries and regions.

Smart’s previous AMO nods include a nomination in 2018 for SHINE OS+ (Secured Health Information Network and Exchange), an electronic medical record and referral system spearheaded by Smart and the Ateneo Java Wireless Competency Center. From 2007 to 2009, the company also won AMOs for several Mobile Money and Advertising-Marketing initiatives, as well as a nomination under the Green Mobile Award for the company’s tarpaulin recycling initiatives./dcb