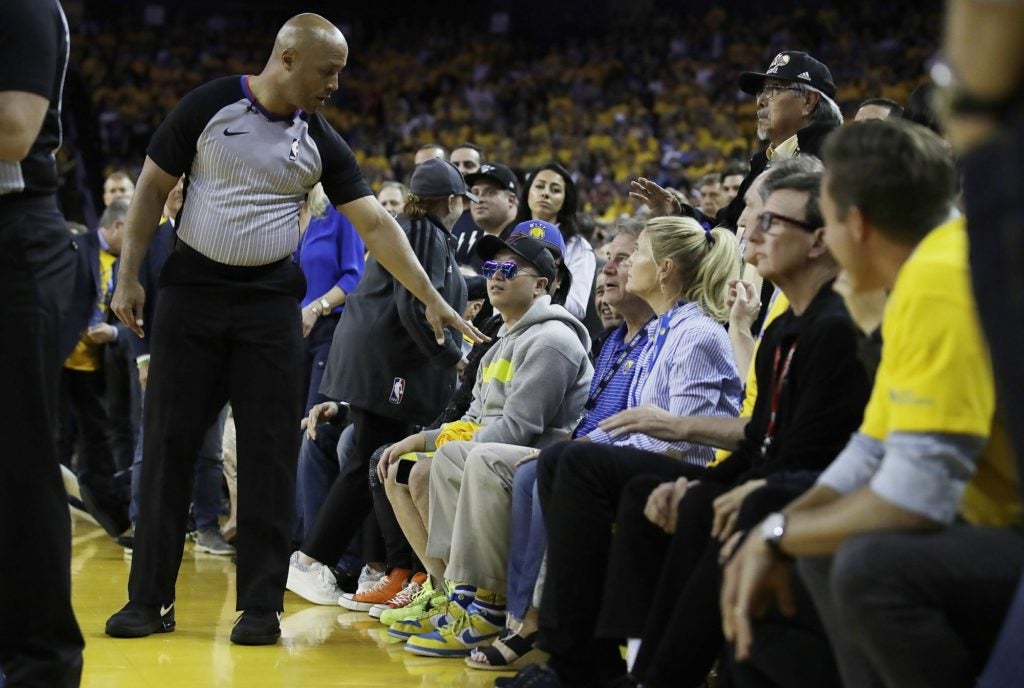 In this photo taken Wednesday, June 5, 2019, referee Marc Davis, left, gestures toward Golden State Warriors investor Mark Stevens, partially obscured in blue shirt, during the second half of Game 3 of basketball’s NBA Finals between the Warriors and the Toronto Raptors in Oakland, California. | AP photo

Mark Stevens, a Warriors’ investor and a member of the team’s executive board, was banned from the NBA for one year and fined Thursday — one day after he shoved Lowry during the fourth quarter of Game 3 of the Toronto-Golden State finals matchup. The NBA announced its decision not long after Lowry said Stevens “shouldn’t be a part of our league.”

“Mr. Stevens’ behavior last night did not reflect the high standard that we hope to exemplify as an organization,” the Warriors said in a release. “We’re extremely disappointed in his actions and, along with Mr. Stevens, offer our sincere apology to Kyle Lowry and the Toronto Raptors organization for this unfortunate misconduct.” 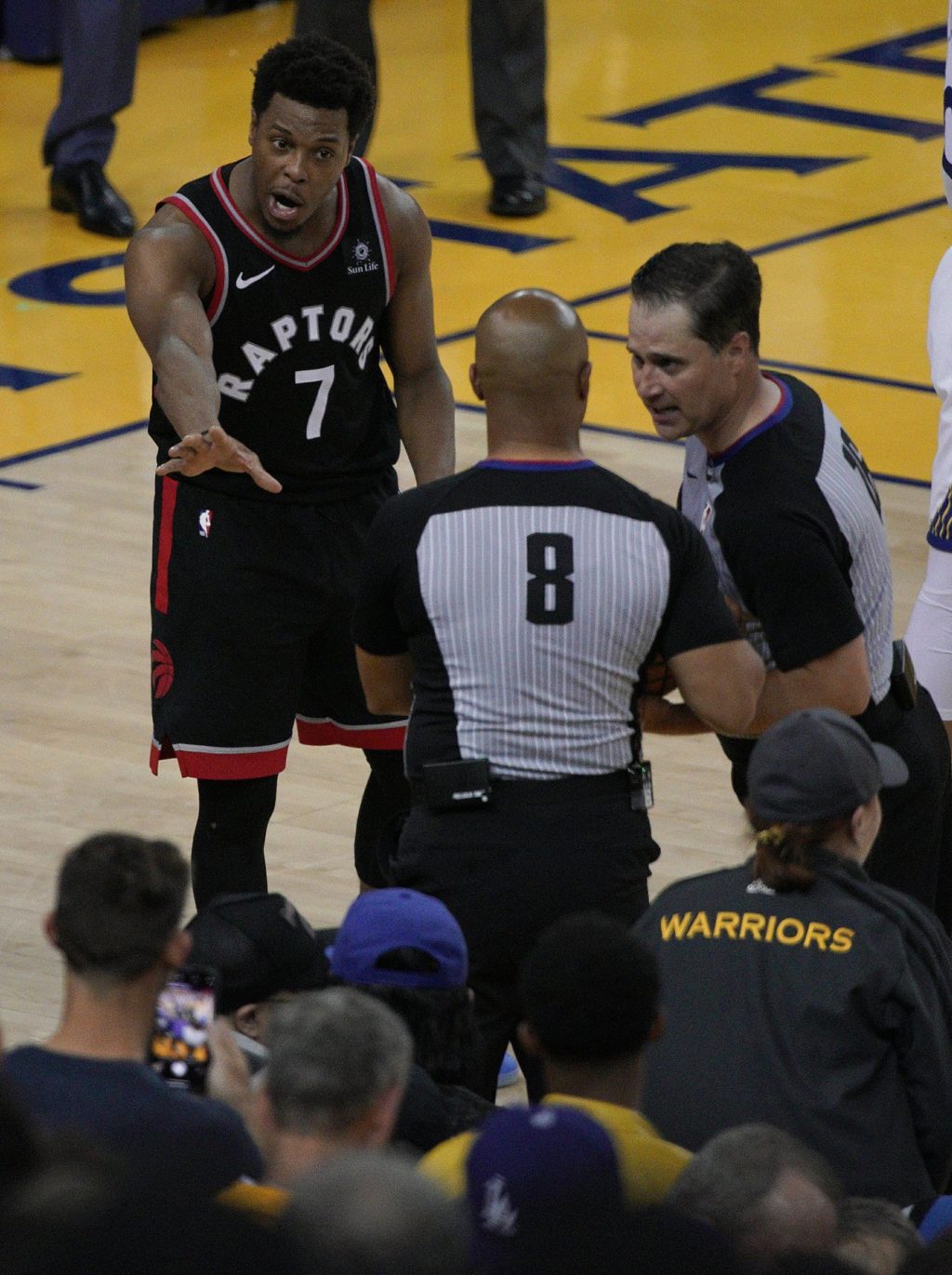 Toronto Raptors guard Kyle Lowry (7) gestures next to referees Marc Davis (8) and referee Kane Fitzgerald near the front row of fans during the second half of Game 3 of basketball’s NBA Finals between the Golden State Warriors and the Raptors in Oakland, California. A fan seated courtside for Game 3 of the NBA Finals was ejected after shoving Lowry when the Raptors star crashed into a row of seats while trying to save a ball from going out of bounds. | AP photo

Lowry dove into a row of courtside seats in an effort to save a loose ball. Stevens, wearing an NBA-issued credential, was seated about two spots away from where Lowry landed. Stevens shoved Lowry in the upper body, and Lowry said he repeated a vulgar phrase to him about four times during the brief incident.

The incident, and the fallout, was the dominant story on the off day between Games 3 and 4 of the series, which resumes Friday.

Warriors players and coaches lauded the way Lowry was able to keep his emotions in check, and many followed their team’s statement and offered apologies to both the Raptors and their point guard.

“Obviously, when you see the video, it’s pretty clear who was in the wrong,” Warriors guard Stephen Curry said, who added that he doesn’t personally know Stevens.

It’s unclear how large a stake Stevens has in the Warriors, and if the team will allow him to remain part of the organization. The team’s media guide lists Stevens — a Silicon Valley billionaire — as a member of the six-person executive board.

“A team representative must be held to the highest possible standard and the conduct of Golden State Warriors investor Mark Stevens last night was beyond unacceptable and has no place in our league,” NBA spokesman Mike Bass said Thursday.

Lowry said Stevens has not reached out to him to apologize.

“I don’t know him. I don’t care to know him,” Lowry said. “He showed his true colors at the time. And you show what you’re really about in that time and at that moment. … No, you showed what you really are.”

Thursday’s series of events began with an apology from the Warriors and an announcement that Stevens would not be allowed at any more games in this series. Players like Los Angeles Lakers standout LeBron James said that wasn’t enough, and James reached out to Lowry personally to offer his support. Hours later, the NBA came out with the decision to fine and ban Stevens.

The NBA’s ban covers all league games and also forbids Stevens from being part of any team events.

“If Kyle was to then hit back, a lot more than a fine would have then happened to Kyle,” Warriors forward Draymond Green said.

This was not the first high-profile incident between players and fans this season.

Oklahoma City’s Russell Westbrook was involved in at least two such scenes during the regular season, one of them leading to a fan’s permanent ban from all events at the arena the Utah Jazz call home. Westbrook reacted angrily after he said a fan at a Utah game made racist comments to him, and the league fined Westbrook $25,000 for responding in a vulgar manner.

Westbrook also was touched by a young fan who was seated courtside at another game, and reacted calmly.

While not a player-fan exchange, New York Knicks owner James Dolan made headlines when a fan at Madison Square Garden told him to “sell the team” in an incident that was captured on video. Dolan told the fan he was rude, asked if he wanted to come to any more games and then told him to “enjoy watching them on TV.” And earlier in these playoffs, Raptors fan Drake actually massaged Toronto coach Nick Nurse’s shoulders during play — to the dismay of the league.

NBA Commissioner Adam Silver said the league has “redoubled” efforts to make sure that fans understand what conduct is appropriate and what isn’t.

“We have had lots of conversations directly with the players’ association, the players, because absolutely we want them to feel that they’re in a safe environment,” Silver said last week in Toronto when the NBA Finals were beginning. “And we don’t want them to be distracted during the game or think that they have to take matters into their own hand.”

“We have to do a better job, the NBA, just of making sure these fans don’t come in and think they can just touch guys and hit them,” Leonard said. “That’s a little extreme.”

Lowry said fans who sit inches from the sideline or baseline should understand that they may get in on the action. Dwyane Wade famously fell on entertainment icons John Legend and Chrissy Teigen as they sat courtside for his final home game with the Miami Heat two months ago; luckily in that case, all three parties could laugh about it afterward.

This was no laughing matter, and the Raptors were stunned to learn that Stevens was part of the Warriors’ organization.

“I was shocked,” Toronto guard Danny Green said. “And a little appalled.”