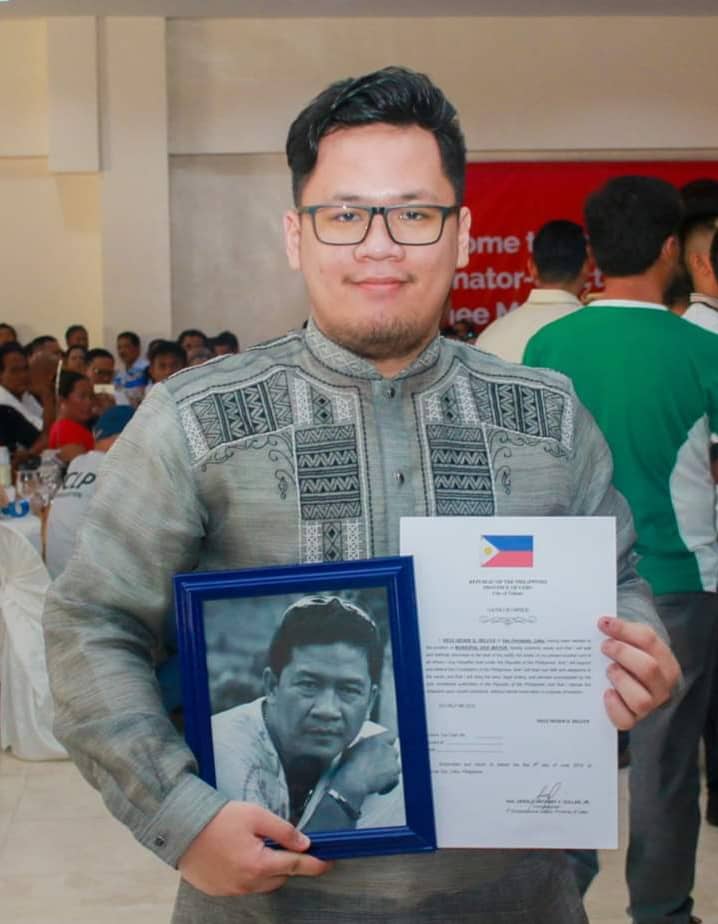 San Fernando vice mayor-elect Ricci Reluya is seen carrying a photo of his father while attending the oath taking ceremony of the victorious members of the Alayon party at the Carcar City Hall. CDN Digital photo | Futch Anthony Inso

Cebu City, Philippines—Almost five months since the ambush-slay of his father, Ricardo “Nonoy” Reluya, San Fernando vice mayor-elect Ricci Reluya still feels he is being guided by the former chief of Barangay Panadtaran.

Ricci, who turns 27 on June 27, 2019, won in the recent May midterm elections, replacing his father’s candidacy after the elder Reluya was killed in an ambush last January 22, 2019, in barangay Linao, Talisay City.

“There are moments wherein he shows himself to me (in my dreams) and I’m able to hug him. And there are times I wake up crying remembering him,” Ricci said.

Aside from Nonoy, also killed in the ambush were staff Ricky Monterona and van driver Allan Bayot. Ricci’s mom, San Fernando Mayor-elect Lakambini “Neneth” Reluya, survived along with two of her aides.

On Thursday, June 6, 2019, Ricci was seen carrying a photograph of his father while attending the oath taking ceremony of the victorious members of the Alayon party at the Carcar City Hall.

Ricci shared to Cebu Daily News Digital that his father still gives him advices and guides him through his dreams.

“One time, he already had shown me who we will be supporting for ABC (Association of Barangay Councils) president. I didn’t even realize nga mao diay to iyang plan until nga I realize nga naa pa diay umaabot nga ABC elections,” he added.

(I didn’t even realize that that was his plan until I realized that there is still an upcoming elections in the ABC.)

Ricci, however, refused to name who they are supporting.

Ricci also thanked senator-elect Imee Marcos for expressing her support to the Reluyas and promising them to help in the investigation in order to give justice to his father’s death.

“Off course, any person who makes it to the point to try to seek justice for the wrongful slay of my father, their help is more than welcome and especially right now that we are surrounded by people who take their stands to ensure that justice will be given to my father. We welcome it open heartedly,” he said.

Ricci promised to continue his father’s projects, promises and plans for San Fernando, such as ensuring the realization of the RORO (roll-on, roll-off) port project in the town and intensifying safety and security for their constituents. /bmjo