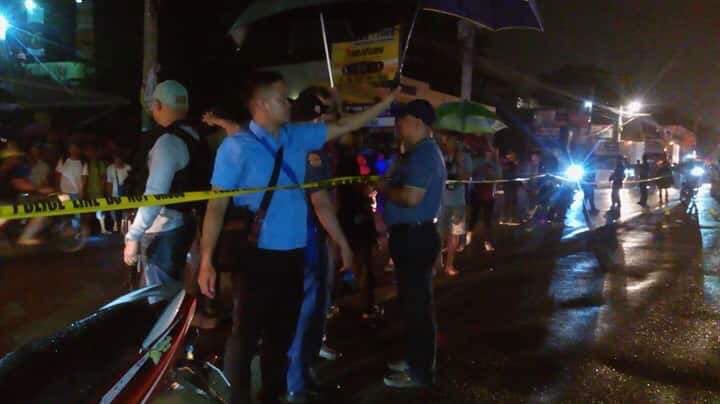 Police cordon the area where the group of San Fernando Mayor Lakambini “Neneth” Reluya was ambushed on Jan. 22, 2019. T he mayor survived but her husband, Ricardo Reluya Jr., and two others died in the ambush. |CDNDigital photo by Benjie Talisic

CEBU CITY, Philippines — It was a bloody night in Talisay City, Cebu on Tuesday, January 22, as separate ambuscades resulted to the death of four persons.

The first ambush happened past 6 p.m. in Barangay Liano, Talisay City when the van boarded by San Fernando Mayor Lakambini “Neneth” Reluya was ambushed by assailants who came on board  motorcycles.

Reluya was hurt but survived the incident along with two other companions.

Unfortunately, her husband. Ricardo Reluya Jr., who was the president of the Association of  Barangay Councils (ABC)  of San Fernando, did not make it, along with two others in the van, identified as Allan Bayot and Ricky Montenora.

Superintendent Marlu Conag, the Talisay City police chief, said that even as the mayor survived the attack,  she was shaken by the death of her husband and their two companion.

While police were  investigating the incident, Chief Superintendent Debold Sinas, the Police Regional Office in Central Visayas (PRO-7) director, proceeded into the area at 11 p.m.

The police,  as of midnight,  continue to cordon the place where Reluya’s bullet-riddled vehicle rested near the sidewalk.

Meanwhile, a separate ambush incident happened at about same time that Mayor Reluya’s vehicle was being waylaid.

Conag identified the fatality as Ranie Medecillo, the barangay captain of Barangay San Isidro of the city.

Police were still determining whether or not the two ambush incidents  were related.

The slay attempt against the mayor was the fourth time that officials of San Fernando were waylaid and killed, three of which occured in just the first three weeks of this  year.

San Fernando Councilor Reneboy Dacalos, 51, was gunned down in the town’s Barangay South Poblacion on January 10, 2019,  while  Johnny Arriesgado, the barangay captain of Magsico who also sat as municipal councilor  when he was the town’s ABC president,  was shot dead inside his car on January 16, 2019 near the town center.