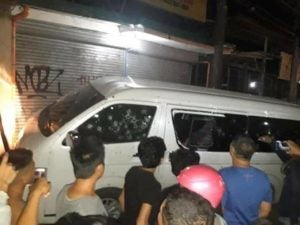 According to Talisay City police chief, Superintendent Marlu Conag, at least three victims were found “lifeless” inside the van of Reluya.

Conag said that Reluya survived the ambush along with two other victims on board the van.

All victims were brought to the hospital by the Emergency Medical Services (EMS), who responded immediately to the scene.

Conag said that they are currently investigating the incident but initial reports revealed that the van was intercepted by another vehicle.

Unknown perpetrators shot at the van multiple times, hitting the three victims found lifeless, and who have yet to be identified.

Cebu Daily News Digital tried to reach Reluya but she was not able to respond.

This is the third ambush involving San Fernando officials in just three weeks.

Johnny Arriesgado, barangay captain of Magsico of San Fernando town, was shot dead inside his car on January 16, 2019 near the town center.

Read Next
Sinulog party fatality was a victim and should not be a fodder for the rumor mills, says family friend