What lies beneath the Patria?

The Archdiocese of Cebu is spending money to find out if anything of cultural and historic import is buried beneath the Patria de Cebu. Dr. John Peterson, my doctoral dissertation adviser, will lead a team that will carry out test excavations probably this week.

This archaeological assessment is required under Republic Act 10066, the National Cultural Heritage Law, but has not been observed in three other excavations going on right now.

One is at the Cebu Technological University campus, where I espied mounds of sandy soil as I passed by recently on what I think is an excavation for foundations of a new building. A second one is at the corner opposite Plaza Independencia, near Friendly Care where AA Barbecue used to stand. The third one is the Torre ni Davide over at the Cebu Capitol, where excavations for that monstrosity of a building were carried out without the required archaeological assessment.

I believe all three are in violation of R.A. 10066 and can be shut down if the National Museum was informed of their failure to ask archaeologists to first carry out an assessment. Why? Because all three are in heritage precincts and may well yield vital evidences of the past. 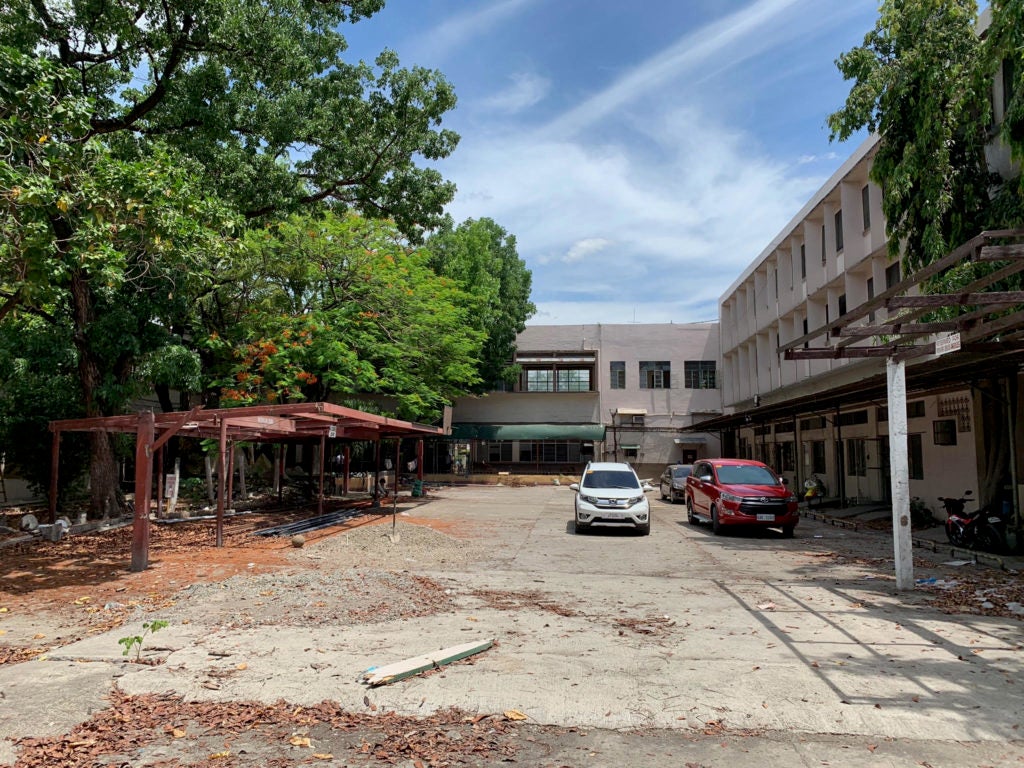 The patio behind the front building of the Patria de Cebu where test excavations will be carried out this week.

This decision to carry out this study on the Patria follows my earlier recommendation to my dear friend Fr. Brian Brigoli, head of the Cebu Archdiocesan Commission for the Cultural Heritage of the Church (CACCHC), to include an archaeological assessment and a possible complete archaeological excavation of the site prior to or in tandem with earth-moving activities.

The press conference called for by the developer, Cebu Landmasters Inc., at 10 a.m. today will probably flesh out the protocol to be carried out in the conduct of this archaeological study, which is the first of its kind in Cebu City in tandem with a property development project.

What can possibly be buried beneath the Patria? Well, if we go by the experience way back in 2006-08 with the excavation of the SRP Subway Tunnel, discovering pre-colonial burials about two to three meters from the current surface is a possibility. Dr. Peterson and I are hoping at the same time that evidences of Humabon’s settlement will be found, which would be timely because the 500th anniversary of the encounter between him and Magellan is less than two years away.

The most immediate artifacts to be uncovered would probably be the old ‘zaguan’ or ‘silong’ of the massively large Palacio Episcopal, the Bishop’s Residence constructed towards the latter half of the Spanish Period. This would require removing the cut coral stones or even ‘piedra china’ (Chinese ship ballasts made of granite, later turned into flooring material) that served as the ground floor of that building. A section of the same type of floor was found at the Cathedral Convent or Rectory, now the Archdiocesan Museum of Cebu and it would be a big surprise if a bigger and more regal building like the Bishop’s Palace did not have one. To recall, the structure stood there across the Cebu Cathedral Church until bombs started falling in Cebu City in the run up to its liberation in World War II.

These stones, if found, would then be retrieved and numbered individually for a possible reconstruction later on when the courtyard of the property development complex will rise about two years from now.

Once the old stone flooring is removed, there will probably be about 50 centimeters of dry soil matrix before the water table sets in. This will then entail wet screening of any excavated soil in order to see ant artifacts as well as animal and human bones.

If this excavation had been done about 75 years ago, right after the building was destroyed by bombs, then the water table would have been much lower, even perhaps down to two meters. But with so many wells dug up in the city, seawater encroachment has long been a problem and so this will be one wet and muddy archaeological study. There will be water pumps to remove water and allow for observation of the soil matrix but one can never really tell how fast water seeps into the test excavations.

The SRP Subway Tunnel yielded a treasure trove of 1400s-1500s ceramics associated with burials located about 2.5 meters down. Let us see if the Patria holds the same evidences or even more.