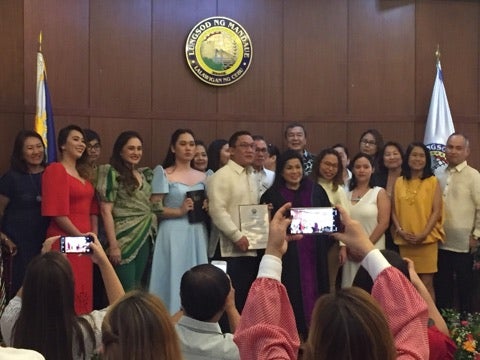 Cortes said that he will start his day by joining the weekly flag raising ceremony at the City Hall grounds.

But contrary to tradition, Cortes said, he will not be entertaining department heads and employees who will be visiting his office on Monday for a courtesy call.

Instead, Cortes said that he will be making his rounds of the different City Hall offices to visit department heads and employees and check on their working conditions and personally see what they are working on.

(Now, I wanted a reverse. We will already do away with courtesy calls, instead I will be visiting the different City Hall departments so that I will get to see what’s the real score in their offices. What is the situation in their offices.)

Cortes said he wanted his fresh mandate spent on bringing government services closer to the Mandauehanons.

(I know that it is difficulty for them to be coming to the office of the mayor. I really want to bring the government closer to the people and we will start doing that here at the Mandaue City Hall.  The mayor will be the one to go down to bring services to the barangays. We will revive the barangayan.)

Read More: Cortes urge new Councilors to hold some of their sessions in the barangays

Meanwhile, Cortes said his transition team is yet to finalize who among the City Hall department heads will be retained in their current positions and who among them will have to be replaced.

He earlier named Atty. Jamaal James Calipayan as his city administrator while Atty. John Eddu Ibañez will be his executive secretary and acting head of the city’s Public Information Office.  Calipayan was his chief of staff when he was still 6th district representative.