With Andales out, Garganera returns to City Council 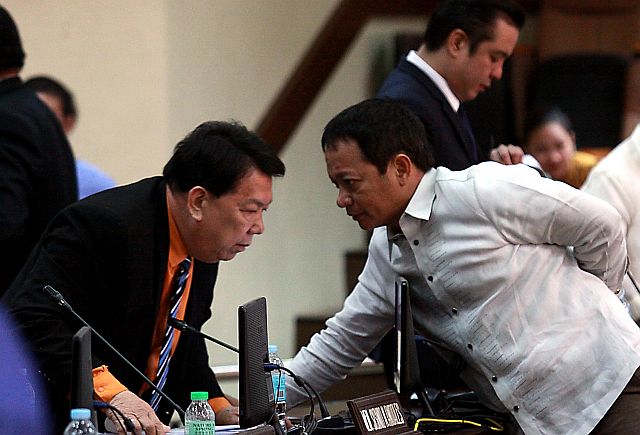 Councilor Sisinio Andales has been disqualified by the Commission on Election en banc. Councilor Joel Garganera is set to replace him in the Cebu City Council. | CDN FILE PHOTO

CEBU CITY, Philippines —The Commission on Election (Comelec) en banc has issued a writ of execution for the disqualification of the Certificate of Candidacy (COC) of Cebu City North District Councilor Sisinio Andales in the recent May 13 elections.

The en banc has previously affirmed the decision of the Comelec Second Division to disqualify Andales favoring the complaint of Allen Canoy that Andales could no longer run for another term following his three consecutive terms as councilor from 2010 to 2019.

Andales was among the 12 councilors, who were suspended for three months in 2016 with then Vice Mayor Edgardo Labella and then Mayor Michael Rama, for granting P20,000 in calamity assistance to all officials and employees of Cebu City Hall in 2013 ithe wake of the earthquake and super typhoon Yolanda.

On his Facebook page, Andales already conceded to the Comelec en banc’s decision and thanked all his supporters.

(Thank you for your support in the 2019 elections with an overwhelming 106,678 votes. We won with votes but was defeated by Comelec. I am the people’s choice, did not engage in vote buying nor intimidation.)

Andales remains hopeful that his appeal in the Supreme Court will have favorable results.

“I am still waiting for the final verdict of my Petition for Review before the Supreme Court reversing the decision of the Comelec En Banc,” he said.

Andales will have to step down as a city councilor pending appeal to the Supreme Court.

This is because Andales failed to get a temporary restraining order (TRO) for the execution of the en banc’s decision within the intended five days for appeal.

READ: After Arcilla, Comelec disqualifies Andales’ candidacy in May 2019 elections

Councilor Joel Garganera, who ended on the 10th spot in the recent elections, will take his place in the council as the 8th councilor of the North District.

The 9th placer in the elections, Councilor Jerry Guardo recently replaced former Councilor Alvin Arcilla after Arcilla met the same fate as Andales before the start of term on July 1.

With the disqualification of Andales, Guardo rises to the 7th spot in the North District and Garganera will take the 8th place.

Garganera will be taking his oath in Manila on July 16, 3 p.m., in front of the officials of the Comelec and will rejoin the City Council for its regular session on July 23.

“Well the wait is finally over. I was sad before when the decision didn’t come out before the election, but now I realized the delay made it a lot sweeter. Salamat Sugbo! (Thank you Cebu!), said Garganera in a text message to the media. / celr