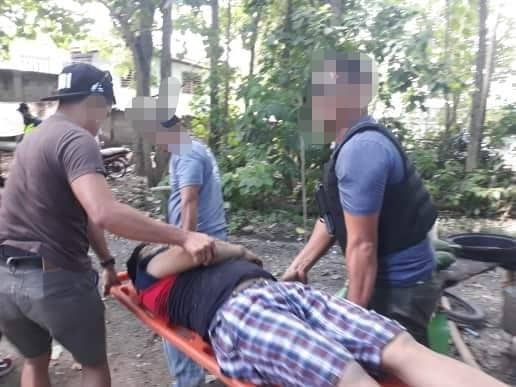 A wounded drug suspect, Ritchie Banquil is being rushed to the hospital for treatment. Banquil who engaged police officers in a shootout did not reach the hospital alive. | Photo courtesy of RSOG-7

Mananquil said Banquil was the target of the operation since he was suspected to be the alleged supplier of illegal drugs in Tubigon town and its neigboring towns.

Read more: Central Visayas may be next big market for illegal drugs—Sinas

The operation was also conducted a few days after Police Brigadier General Debold Sinas, Police Regional Office in Central Visayas director, said that Central Visayas especially Cebu might be the next big market for illegal drugs.

Sinas based his assumption on the P1.12 billion confiscated shabu since July last year in the region with Cebu contributing a bigger part of the police drug haul.

In the Bohol operation, Mananquil said that the shootout happened as police were about three meters from Banquil’s house to serve a search warrant, which was issued by Executive Judge Leo Moises Lison of RTC Bohol.

Mananquil said they asked the court for a search warrant in court on the house of Banquil after they confirmed about his alleged illegal activities there.

He said Banquil allegedly fired at the approaching police officers, who promptly took cover and fired back.

The shooting lasted about 15 minutes and ended with Banquil wounded in the shootout.

Mananquil said that they then searched Banquil’s house, arrested four persons inside.

He also said that they confiscated a kilo of suspected shabu with an estimated Dangerous Drugs Board value of P6.8 million, a box of suspected party drugs, a .45 caliber pistol and a .38 caliber revolver with ammunition.

Mananquil also said that two of those arrested, Junrey Taghap, Jayson Asuel, were allegedly clients of Banquil, who were allegedly using drugs inside the house.

He said they found them inside a room allegedly with illegal drugs on the table.

He also said that they also arrested another client, Romel Ulamot, who was allegedly waiting for his order of illegal drugs.

Mananquil said the fourth arrested person was Banquil’s sister, Kristina Banquil, who allegedly admitted that she was part of his brother’s drug operation.

Mananquil said the four arrested did not have a chance to get out the house and escape since they took cover when they heard exchange of gunfire./dbs