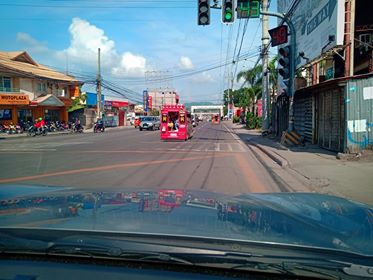 CT-TODA started this morning, July 23, the clearing of the outer lanes of the Cebu South Road at the vicinity of Barangay Lawaan II, Talisay City. /Photo Contributed by Jonathan Tumulak

CEBU CITY, Philippines — Following the successful implementation of their “no helmet, no driving” and “left lane must turn left” policies, the Talisay City government is now planning to impose a city-wide campaign against illegal parked vehicles.

Jonathan Tumulak, chief of the City of Talisay – Traffic Operation Development Authority (CT-TODA), said the implementation of the city’s  illegal parking ordinance passed in 2012 is expected clear city roads of all kinds of obstructions.

(The mayor (Gerald Anthony Gullas Jr.) has already given instructions for us to clear especially the national highway including the Cebu South Coastal Road that connects to the SRP. Since Monday, we already launched our campaign against illegal parking.)

Talisay City’s anti-illegal parking ordinance authorizes the clamping of illegal parked vehicles, whose owners will be asked to pay a fine of P500.

CT-TODA, Tumulak will also review the clamped vehicle’s previous records to check earlier offenses and fines that have not been paid by its owner.

But Tumulak said that they are yet to decide on the final schedule for the ordinance’s full implementation because they wanted to allocate enough time for information dissemination to also update city residents of the measure.

On Tuesday morning, Tumulak led CT-TODA enforcers in clearing and conducting an information drive in a portion of the Cebu South Road at the vicinity of Barangay Lawaan II.

(We are just waiting for the right time to start the full implementation of the ordinance. We wanted to start with the conduct of an information drive to make the public aware that illegal parking will not be tolerated on Talisay City roads.) /dcb

Read Next
Magna Carta for Barangays: A call to give village officials just compensation