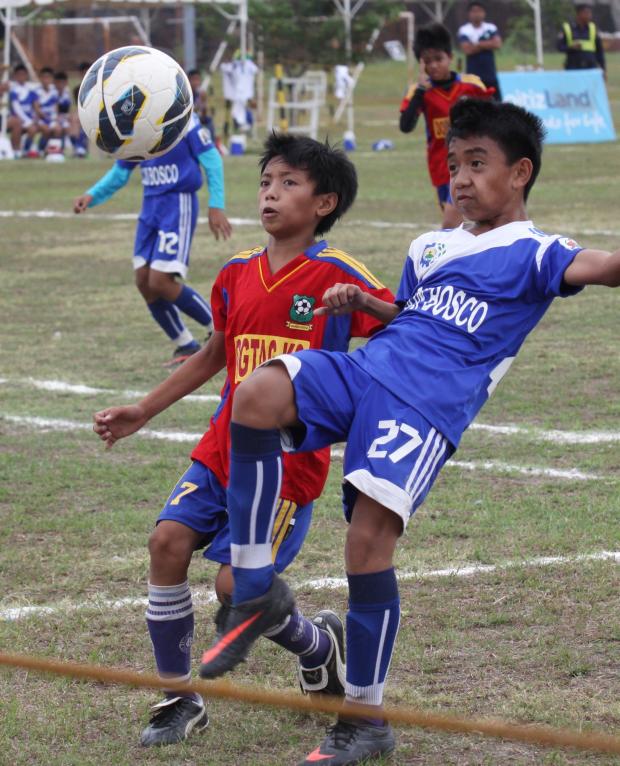 THE GAMES ON. Justin Hidang (left) of Warshockz Famball and Jascha Mari Tabar (27) of Don Bosco 1 battle for ball possession in an under-13 game of the Aboitiz Football Cup at the AboitizSports Field in Mandaue City. Don Bosco won the game, 4-1) (CDN PHOTO/ JUNJIE MENDOZA)

The photo of a young athlete’s bloodied face and another of a man with clenched fist raised, ready to strike a blow went viral  on the Internet after last Sunday’s melee in an Aboitiz Cup football match in Mandaue City.

Was he really a troublemaker?

Some parents of Sacred Heart School – Ateneo de Cebu players who watched the fracas came to the defense of Rico Mongaya, the stocky man seen standing over two athletes scuffling on the ground.

They said Mongaya, father of an Ateneo student football player, had actually intervened to rescue  15-year-old Ateneo athlete, Jose Mari Kwan, who was being “choked” by the goalkeeper of the Alcoy Football Club.

“We, parents of SHS-AdC players, thank Mongaya for his selfless action. In our eyes, he saved JM Kwan,” said the March 20 statement signed by seven parents and siblings of SHS-AdC athletes.

The account was an attempt to clear the air and counter heated online comments  that Mongaya was an adult bully in the commotion, whose images shocked the local sports community and enraged online viewers.

The unprecedented violence on the field between players of a private school and rural athletes from Alcoy town during the 16th Aboitiz Cup raised questions about unhealthy levels of competition and the role of parents and spectators in the melee.

Coaches and several players of both teams were meted 6-month suspensions by the Cebu Football Association in a decision announced last Wednesday.

Mongaya and another teenage Alcoy town spectator who punched four Ateneo student athletes will also be permanently banned from the field.

Both camps have hinted of  taking legal action even after the ruling was given.

After the Alcoy team went to the Capitol to tell their side of the incident to Vice Gov. Agnes Mapgale last week, parents of  another injured

Ateneo athlete, Kintaro Miyagi, plan to see the vice governor on Monday to tell their side as well.

Earlier reports said  a verbal taunt triggered the free-for-all in the football game, where  Sacred Heart School -Ateneo de Cebu was leading by 5 to 1.

The tournament, which started last December and runs until April 6, is in its final stages with the Under-18 and under-13 divisions winding up its quarterfinal round matches.

“We understand the negative reactions to the photos published particularly because the whole story has not been told yet. The pictures may speak millions of words but still these are selected snapshots of a flow of events that do not really tell what actually happened,” said  Ateneo parents in their written statement.

“The Kwans have since been profusely thanking Mongaya for saving JM because he was already out of breath when help came. The parents are in the process of filing a case against Binolirao (Alcoy Football Club goalkeeper Rodenel Binolirao) in the interest of justice and to prevent this bully from harming smaller players in the future.”

“We are appealing to all to take a second look and this time to consider the bigger picture. We hope this controversy will be resolved soonest in the interest of justice and truth.”

One of the signatories, Sandy Miagi, is the sister of  Ateneo student Kintaro Miyagi, who passed out after he was mauled during the commotion.

He later took  a photograph of his face and  swollen eye and posted the selfie on his Instagram account.  Migyagi is a member of the Philippine

Cebu Daily News learned that Mongaya, who works in the Bureau of Customs, rushed to the field to look for his son, one of the Ateneo players,  when the melee broke out.  He spotted the young Kwan on the ground and  intervened.

According to the Ateneo parents, 15-year-old Jose Mari Kwan, who is 5 feet tall, was first punched by the Alcoy Football Club goalkeeper Binolirao Jr., who is reportedly 17 years old and about 5’7” tall, even before the commotion at the other end of the football field started.

“When the commotion started, Binolirao rushed to Kwan who was by then some five meters away. He knocked the smaller boy down and choked him with a potentially fatal head lock.

“Binolirao admitted using a headlock in the Superbalita report of his visit to Cebu Vice Gov. Agnes Magpale. A headlock is a dangerous UFC hold often used by bullies.”

“This was the situation that parents of both Sacred Heart and Alcoy players saw. At this point, Rico Mongaya rushed to help the smaller boy.”

They said their account was based on first-hand information.