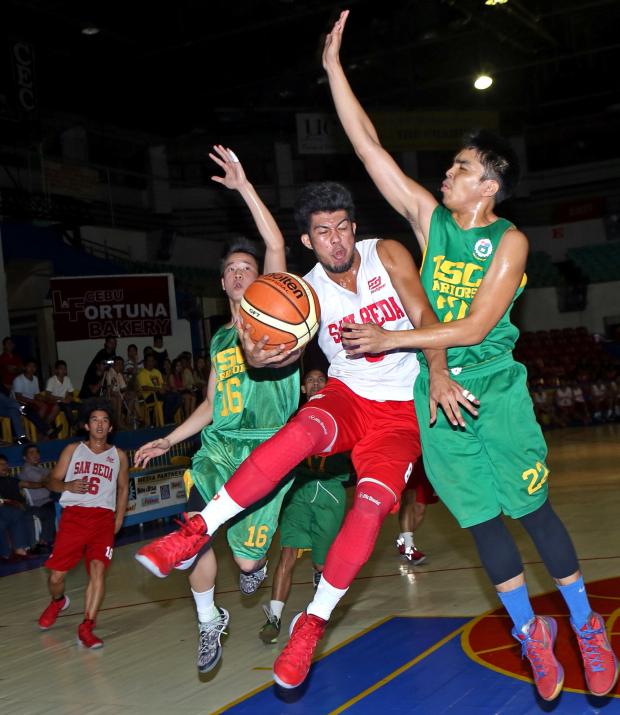 Jaypee Mendoza of San Beda goes for a lay-up against USC’s Ian Ortega and Kieffer Lim in the Mayor’s Cup tournament at the Cebu Coliseum. (CDN PHOTO/LITO TECSON)

The reigning NCAA rulers San Beda Red Lions put one foot inside the door of yet another championship conquest as they blasted the University of San Carlos (USC) Warriors, 78-61, in the 2014 Cebu City Mayor’s Cup Inter-Collegiate Basketball Tournament last night at the Cebu Coliseum.

The win was San Beda’s second in as many outings after their 78-63 victory over the University of San Jose-Recoletos (USJ-R) Jaguars Friday night. A win today over the reigning Cebu Schools Athletic Foundation Inc. crown-holders University of the Visayas (UV) Green Lancers will give them the crown.

UV, which beat USJ-R in overtime, 83-79, yesterday, shares the same record as USC at 1-1 (win-loss). A win today by both UV and USC will result in a triple-tie. Should this scenario unfold, the Olympic quotient system will be used to break the tie and decide the champion.

For a while, the Warriors held their own against the Red Lions, winners of seven of the eight championships in the NCAA, as they were tied at 28-all. But San Beda gained their second wind and uncorked a 12-0 run anchored on the inside scoring of import, Pierre Tankoua, who had nine in that stretch to push them in front, 40-28, at halftime.

Tankoua also scored San Beda’s last five points in the third canto that gave them a 54-39 lead, which eventually ballooned to a high of 24, 74-50.

The 6-foot-5 Cameroonian finished with 24 points.

USC failed to sustain the momentum of their impressive 70-65 win over UV on Friday as only one player scored in double-figures in Nico Magat.

Meanwhile, John Abad scored 24 in UV’s win over USJ-R.  Raymund Catipay had 18 to pace the Jaguars, which remained winless in two games.

The Cebu City Niños clobbered Mandaue, 72-58, in the women’s division.