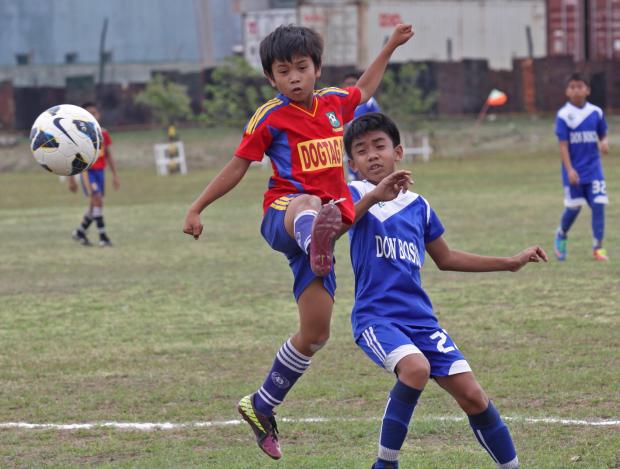 An under-13 football game unfolds at the Aboitiz football field. (CDN PHOTO/JUNJIE MENDOZA)

This is not the first time that I have written about this and definitely this will not be the last, but in light of the recent event that gave Cebu football a black eye, I am writing about being a parent of an athlete again.

The brawl last Sunday involving players of Alcoy FC and Sacred Heart School-Ateneo de Cebu was a sad reminder about how we should act in the various roles we play in the world of sports.

I feel very bad about the whole thing even if I wasn’t there when it happened because of many things. I am part of the board of the Cebu Football Association. I am also a parent of a football player. My kids go to SHS-Ateneo de Cebu. I head the security and discipline committee of the CFA. I feel insulted that  many people have lambasted the whole SHS-AdC community about the incident. Most of all, I have been writing about the role of parents in sports for the past many years.

In the course of the investigation on the incident, I got the whole picture. Atty. Julius Entise, one of the members of the discipline committee, who was at the scene, has compiled notes about the incident and talked to the people involved.

(The Cebu Football Association announced on Wednesday their decision to suspend  the  coaches and some players of both teams for six months– Editor).

One of those that has been suggested is for an orientation program for parents, who would like or who have already gotten their kids into sports.

I don’t know how we can get many parents to join this, but I believe that those who really care for their children would take time to understand their role in the child’s development through sports.

My son, who loves to play football, is already in college. Although he continues to find time to play despite his studies, I try my best to watch him play when I can.

It is normal for parents to want the best for our children.

Many from my generation of parents are giving our children what we missed during our own childhood. My son got his first pair of soccer shoes when he was about 2 years old and he even forced me to buy a similar pair, which rekindled my love for the game.

Many other parents picked up the game or learned to enjoy it when their sons started playing. Some have been very serious about doing research, paying for extra sessions with coaches, and sending them to tournaments and clinics in other parts of the country and the world to hone their skills.

While it is important that we provide financially for their development, there are many things we ought to remember when we go to the practices and the games.

1. You are a parent and not the coach.

2. You should stay away from the children while they are practicing so as not to make them lose focus.

3. Yes, you love your child so much and want him or her well-hydrated, but running into the field to wipe their back and giving them water even if they have not been given a break is a breach of discipline.

4. Cheer for your child, their teammates and even their opponents. Acknowledge the good performance of the players no matter which side they play for.

5. Winning is not everything, so don’t get angry when your child or his or her team loses.

7. If your child is engaged in a contact sport, expect some contact, but the good coaches and trainers can help your children minimize or avoid injuries.

8. Do not impose yourself upon the coaches, school or team officials even if you contribute an amount of money on a regular basis to help pay for your child’s coach or trainer.

9. Be supportive by providing what you can in terms of equipment, refreshments and moral support.

10. Be a good example to your children.

Participating in sports teaches our children a lot about life and it helps prepare them for their future.

It is normal for us to try to make life easier for them, but then we must also remember that the more we pamper them, the more we are making it more difficult for them to cope when we are not around anymore.

As the famous song goes, we just have to “let it go”.