How to cope with heartbreak? Pau Amistuoso shows us the way 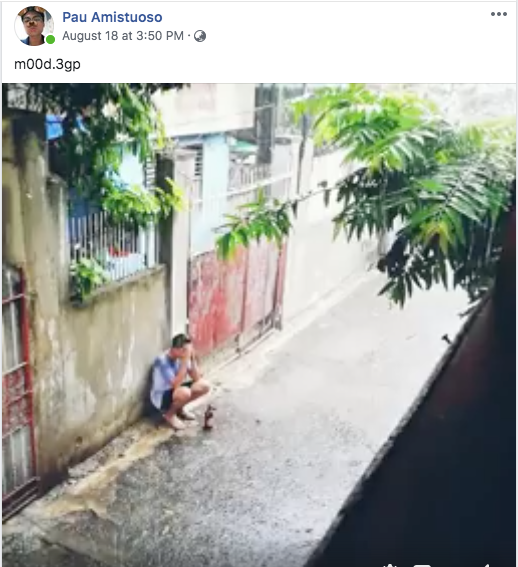 CEBU CITY, Philippines—The rainy season is not just the time for cuddles and snuggles.

It is also the moment to let the tears flow, letting them fall in sync with the raindrops especially when one is experiencing heartbreak.

For Jose Paulo “Pau” Amistuoso, 27, the rainy afternoon of August 18 was the perfect time to wash away the pain from a recent break-up.

“I was really heartbroken and that time my problems were piling up especially my problematic love life,” he tells CDN Digital.

Determined to make light of his pain, Pau recorded a video of himself outside their house in Barangay Hipodromo.

He can be seen drinking beer from a bottle while the rain pours.

“I just decided to record [the moment] and do the video for comic relief.  I just missed being under the rain too and it was the perfect avenue for me to cry without being too obvious,” shares Pau.

He says the inspiration was from a video of a guy drinking to vent out his emotions and later posted it on Facebook.

Pau edited the raw video and added the music and lyrics of the song “Nobela” by alternative rock band, Join the Club.

Pau was already chatty and cheery during an interview with CDN Digital on Wednesday, August 21.

Ultimately, Pau says making the video was his way of coping with heartbreak.

TAGS: copying mechanism, crying in the rain, heartbreak, heartbreak crying, you can make it through the rain