Freedivers showcase ‘under the sea’ wonders of Moalboal 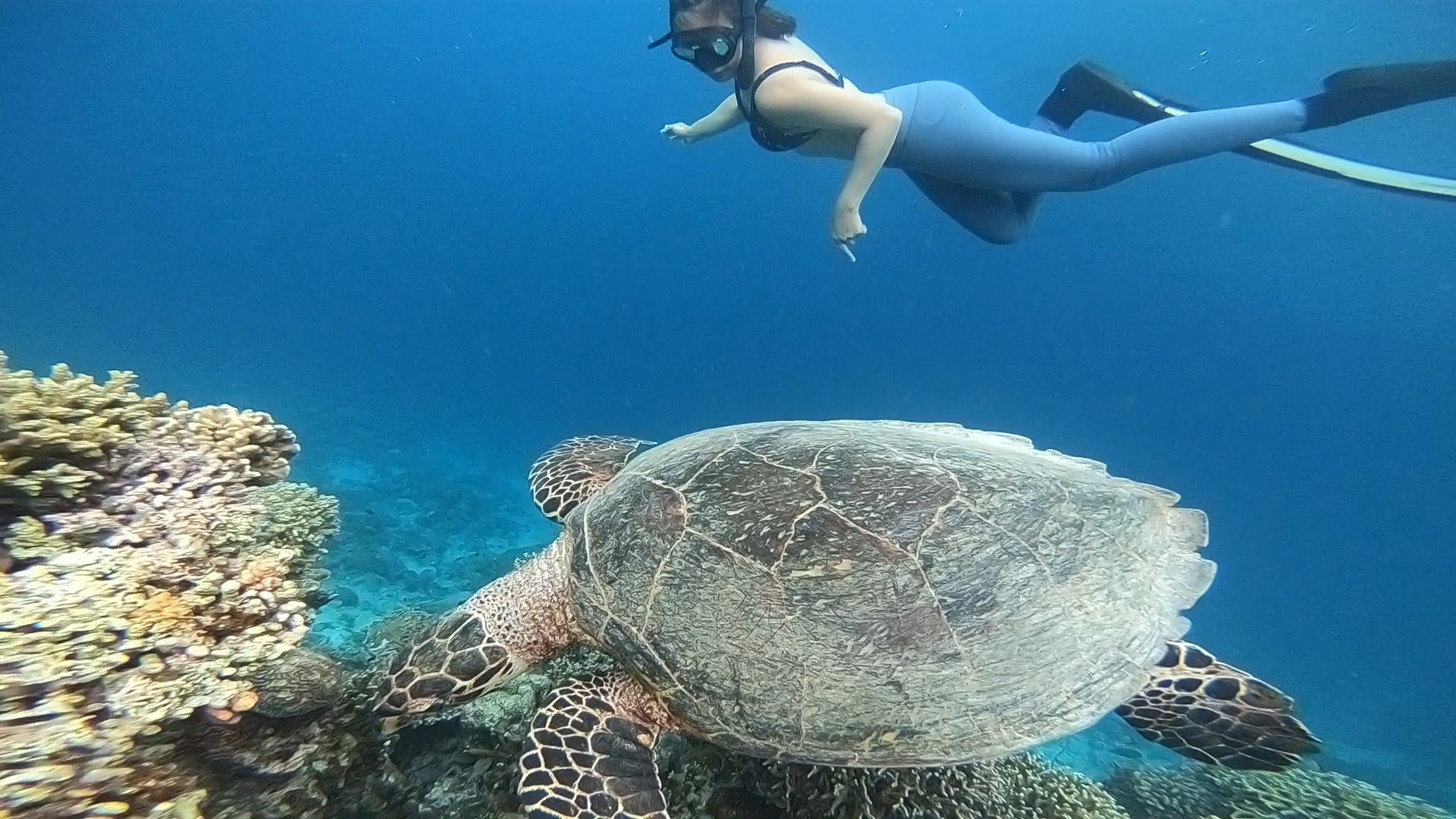 Freediver Xyza Cortes, a practicing nurse, feels blessed to have shared a moment with a mother turtle in this photo taken underwater in the southern Cebu town of Moalboal. CONTRIBUTED PHOTO / Wii Lauron

CEBU CITY, Philippines–They are not mermaids (or mermen) but freedivers, the collective term used to describe individuals who swim with no scuba gears, have definitely spent time with turtles and schools of fish under the sea.

Freedivers practice an underwater sport called freediving, which does not rely on any breathing apparatus. Instead, freedivers are master breath-holders wearing only fins and snorkel masks to commune with nature underwater.

Freediving is often described as “extreme” but the sport is not about throwing caution to the wind.

It requires ample amount of discipline, training, and patience.

Taking advantage of the long weekend from August 25 to 26, some freedivers gathered at Nicco’s Place, an affordable accommodation which serves as the home for many freedivers in the southern Cebu town of Moalboal.

Moalboal is about 85 kilometers from Cebu City.

Nicco’s Place, which is located in Barangay Basdiot, was their base for a two-day adventure.

It is only 1.9 kilometers from Panagsama Beach. Right across Panagsama Beach is Pescador Island, one of Moalboal’s main dive spots known for its rich marine life which attracts divers from all over the world.

One of the freedivers was Xyza Cortes, a practicing nurse.

“(As freedivers), we advocate for seeing or interacting with the underwater creatures in their natural habitat,” says the 30-year-old former swimmer.

Xyza was born in Cebu and raised in the town of Aurora in Zamboanga del Sur.

She came back to Cebu during her college years and finished her Nursing degree at the University of Cebu Banilad. 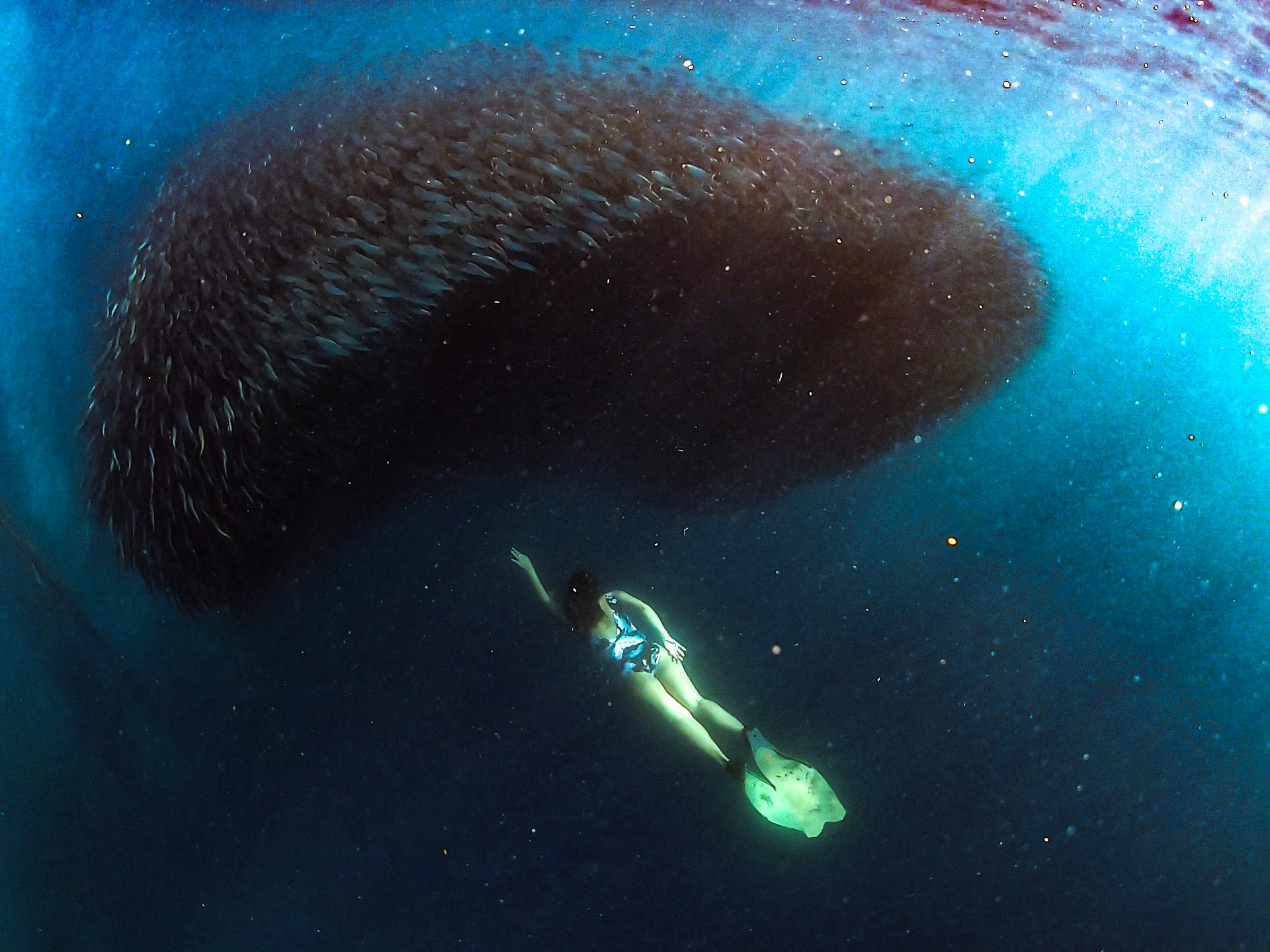 Pilchard School, also known as sardine run, is an underwater wonder that can be witnessed in Moalboal. CONTRIBUTED PHOTO / Wii Lauron

Nobody introduced Xyza to freediving.

“I worked overseas so basically, I am not a fan of any sport until I ‘met’ freediving,” says the resident of Barangay Labangon, Cebu City.

But perhaps the ocean called her because she saw a freediver while she was snorkeling/scuba diving in Moalboal.

“I asked a few locals. I gave it a try. It was way beautiful and marvelous than I expected,” she shares.

Xyza then took an introductory course and the love affair with underwater creatures developed from then on.

Hendrix Gil Lato, an architect by profession, spent most of his childhood years in Barangay Libas, Merida, Leyte where he learned how to swim.

“I grew up in a provincial setting. Our house was in between the mountain and the sea so I had that connection to nature as a child,” he shares.

Hendrix, also a painter and illustrator, says he learned about freediving from Lester Taboada, a fellow friend from an artist group called Artkada.

It was Lester who introduced him to Sawum Freedivers in 2017.

Hendrix has been freediving for two years, a hobby that helped him appreciate the ocean and opened his eyes to protect it even while having fun.

“I joined clean-up drives and ocean conservation groups. The freediving skills I learned came in handy when I was doing volunteer works to protect the oceans,” says the 29-year-old artist and resident of Barangay Banilad, Mandaue City. 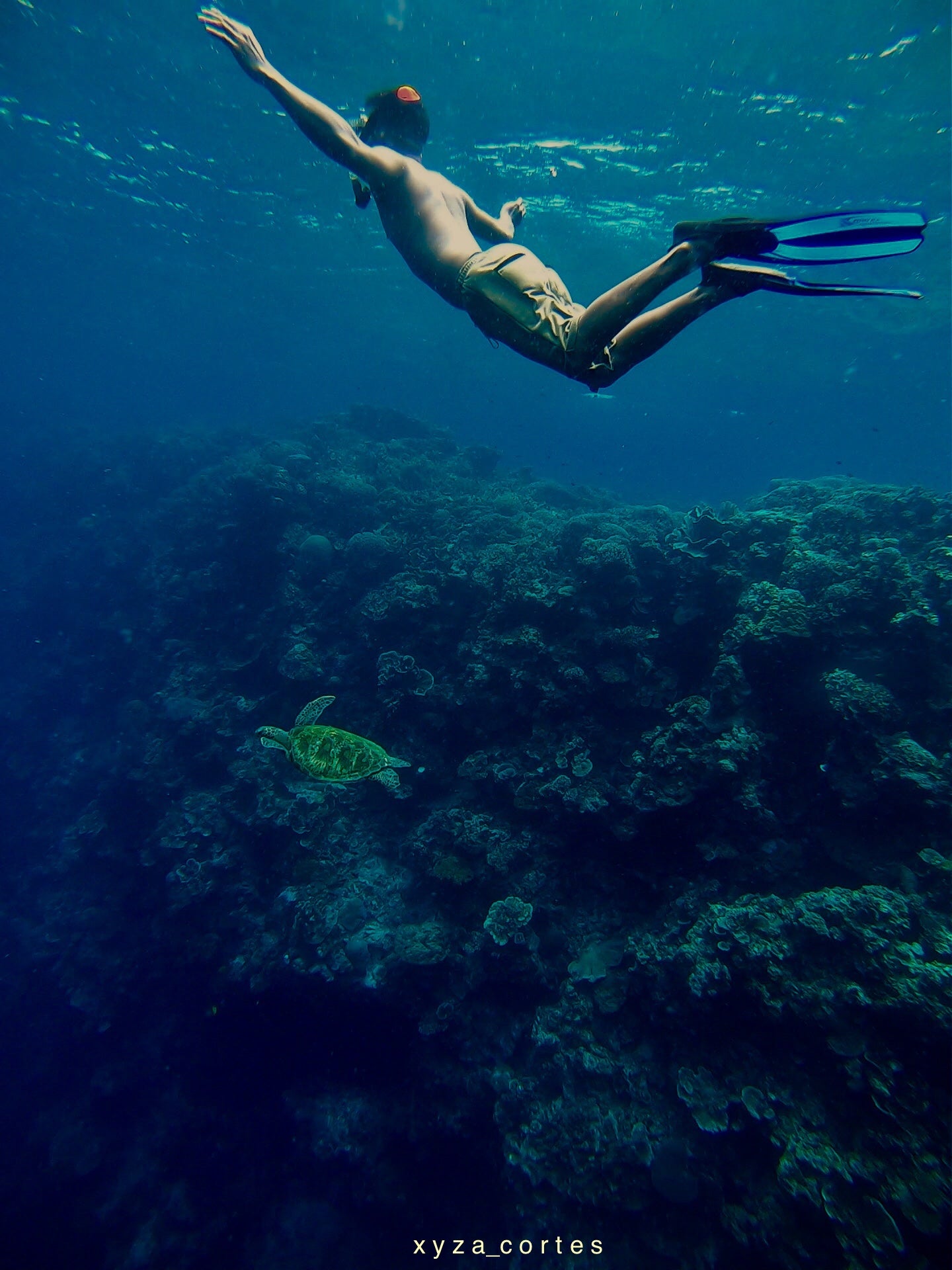 Artist and freediver Hendrix Lato is seen in these photos swimming with a sea turtle, a proof of Moalboal’s rich marine biodiversity. CONTRIBUTED PHOTOS / Xyza Cortes 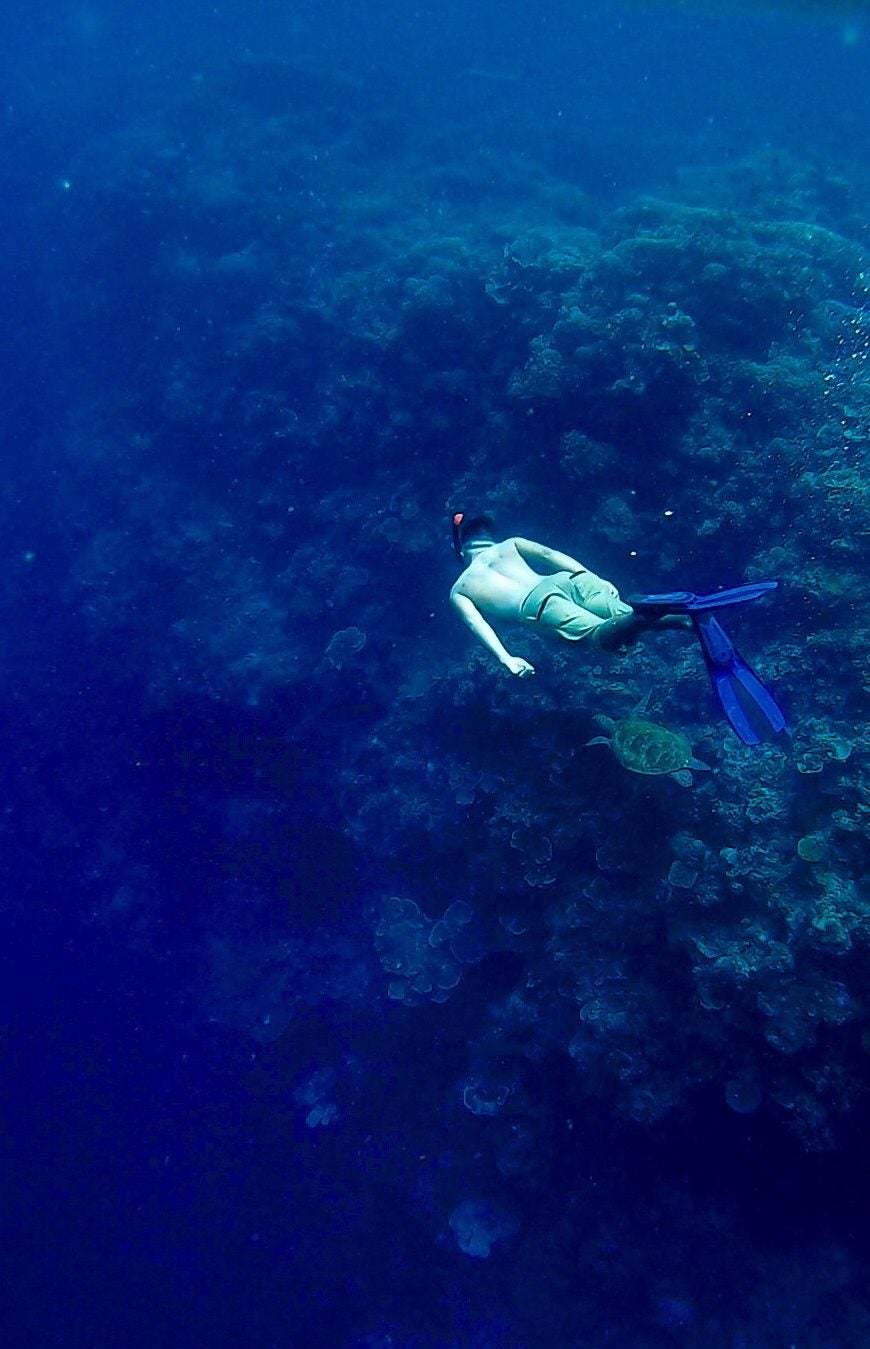 Joining Xyza and Hendrix in the underwater adventure were other freedivers from different groups in Cebu.

These groups are Sawum, Orca, and Dive Ta Bai, which prove that freediving is a growing sport in an island-province like Cebu.

Xyza says a freediver can already interact with underwater creatures as shallow as three meters or nine feet.

“As shallow as three meters (nine feet), you can get the chance to interact with them. The max depth I recorded was 11 meters but my instructor can reach 40 plus meters,” she tells CDN Digital.

Hendrix says freediving can be an expensive sport in the beginning because you have to purchase the necessary equipment such as fins and snorkel masks.

Xyza says it is up to the person to invest in gears. 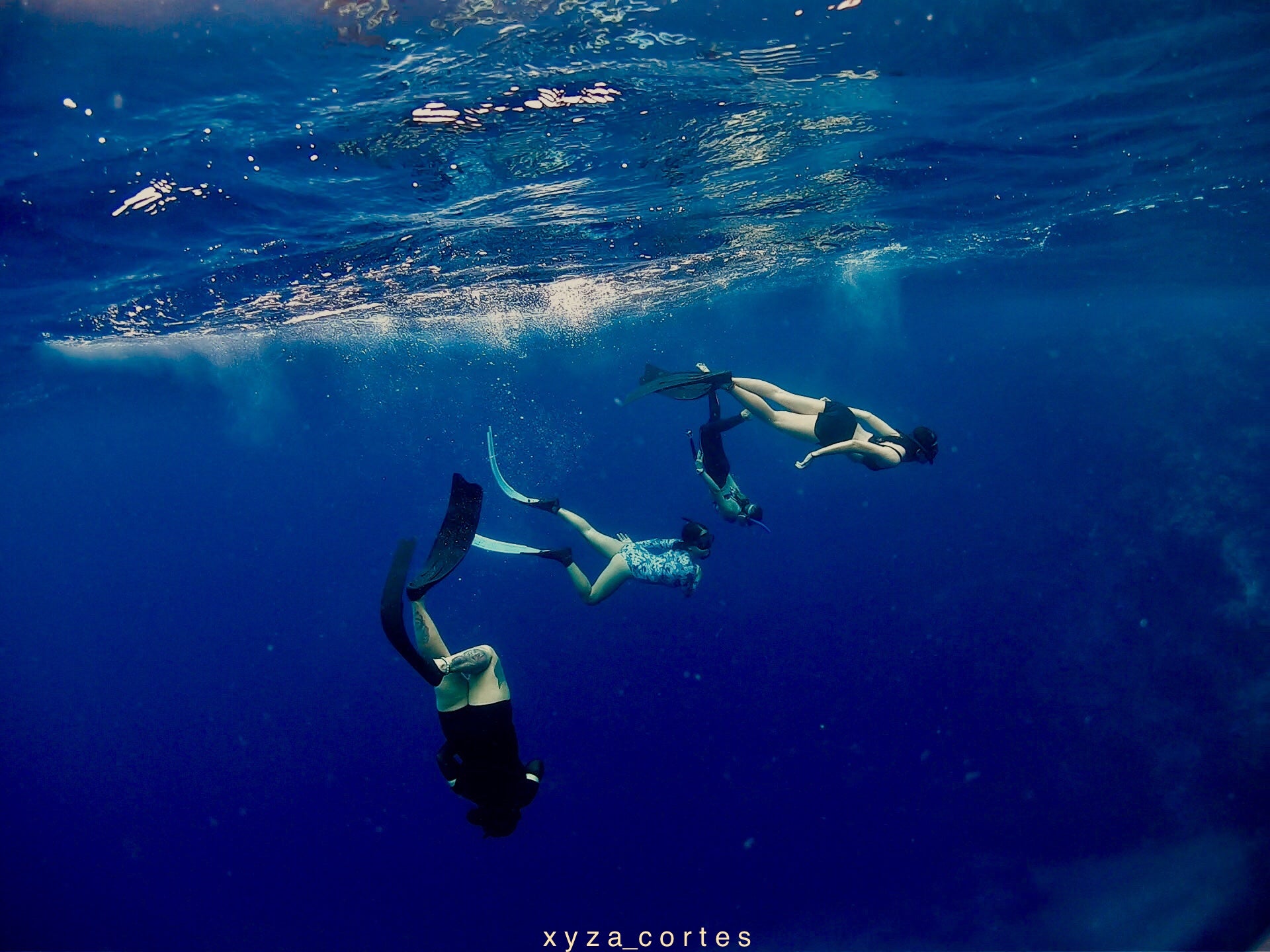 Freediving is a growing sport in Cebu. It is also a great avenue to meet new people and make new friends. CONTRIBUTED PHOTO / Xyza Cortes

Practicing the sport, Xyza says she developed the highest admiration for the members of the Badjao tribe, who can swim underwater better than the ones who are trained as freedivers.

“They know this sport way better than we do with improvised plywood,” she says.

Ultimately, says Xyza, freediving is about being more aware of the role that you play in protecting the oceans and caring for its creatures.

“This what we truly advocate for,” she shares.