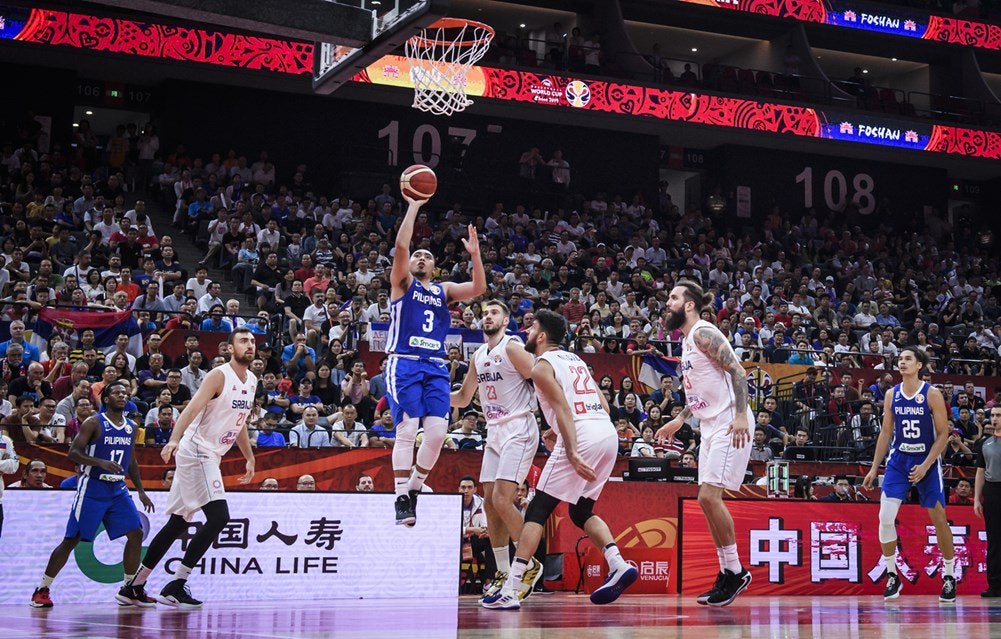 Gilas Pilipinas vs Serbia in the group stage of the 2019 Fiba World Cup. Photo fiba.basketball

FOSHAN, China—Does the Philippines really have the materials to play in the global stage?

The coach of Serbia, which on Monday night just hammered Gilas Pilipinas to submission on the way to a 126-67 win, certainly doesn’t think so. Who can argue with him?

“Obviously, you’re missing quality, and the result of these two games (against European teams) showed that,” Sasha Djordjevic, who in the latter stages of the blowout almost blew his top over what he thought was a dirty foul by Paul Lee on one of his players, said, still hot-headed despite the win that assured his charges of advancing to the next stage.

“I think you (Filipinos) showed some balance and quickness,” he added as a consolation. “But two European top teams (Italy and Serbia) who know how to play tough, physical basketball (give you) results to think about (for the future).”

Djordjevic also took shots on how the Filipinos play the game, obviously knowing what happened during the “basketbrawl” with Australia July last year in Bulacan.

“I don’t like dirty plays, and I don’t like when you seem to have an intention to hurt a player,” he said, referring to Lee’s nudge on Marko Guduric that had the Serbian guard lying on the floor for a few seconds midway through the fourth period and the rout already sealed.

“That was (just) a bump,” Yeng Guiao said in defending Lee. “We were the ones on the shorter end of the calls. There were a lot of touch fouls (called on us), which made it more difficult for us.

“Andray (Blatche) was in early foul trouble,” Guiao continued. “I just realized that they (international referees) are worse than the PBA (referees).”

“You have to stop that, you have to play fair,” he went on. “Play tough, play physical but tough, but play fair. That’s what I ask my players.”

Gilas came here thinking it could give the Italians and the Serbs some sort of fight—not the bloody kind of fight that Djordjevic seems to be implying.

Coaching staff led by Guiao, before leaving last week, was hoping to come up with a decent fight, to say the least. But the Filipinos were waylaid without mercy, losing to the Italians by 46 and then that blasting they got from Nikola Jokic and the fourth-ranked team in the globe.

A 52.5-point average losing margin is certainly something to think about.