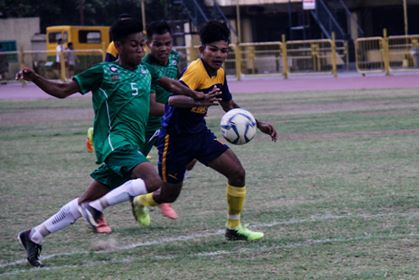 Kim Omus from the University of Visayas (Green) and Kurt Cuizon (Yellow and Blue) of the University of Cebu fight for the ball during the opening college games of the CESAFI Football Tournament on Sunday, September 8, at the Cebu City Sports Center.| Photo by Gerard Vincent Francisco / CDN Digital

After a scoreless first half, Vicente scored his first goal via a free kick right outside the penalty box to hand UV a 1-0 lead.

The Webmasters, however, was able to score an equalizer via Kurt Cuizon.

But a tackle from behind inside the penalty box gave Vicente the chance to score his second goal and seal the victory for the Green Booters.

Jimmy Sasing Jr. scored for USPF in the 43rd minute while Ian Vergara allowed the equalizer for USJ-R in the 56th minute.

In the junior division, the younger kicking Jaguars also opened successfully opened their campaign this season with an 8-1 routing of the Sisters of Mary (SMS) Boystown.

Dustin Drey Ramirez started the scoring spree for USJ-R as he found the back of the net four times, twice each in the first and second half. Christian Agot added a brace while the rest of the goals were scored by James Villarin and John Jubac.

The lone goal by SMS was scored by Marcelo Adobas.