‘Sigbin,’ a Bisaya traveling theater, to be staged in NegOr, Bohol and Cebu 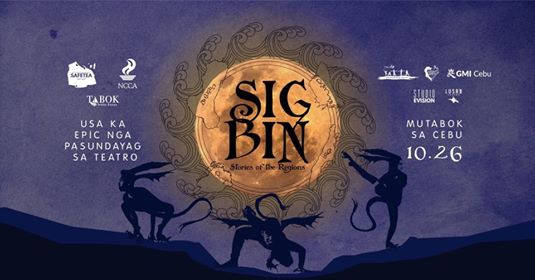 CEBU CITY, Philippines – A Bisaya traveling theater show will soon be staged in the provinces of Cebu, Bohol, and Negros.

Theater actor and director Eli Razo confirmed to CDN Digital on Monday, September 15, that the traveling theater show is now a go after “Sigbin” got funded by the National Commission for Culture and the Arts (NCAA) through its 2019 Competitive Grant in the Arts Committee.

“Since it is a Bisaya traveling show, we want it represented by a creature that is distinctively Bisaya and that every Bisaya kid has heard of or even seen in the past,” he explained to CDN Digital how they come up with the show’s title.

This is organized by Tabok, a Central Visayas community theater network founded in 2016. The members involved in this group are the “Youth Advocates Through Theater Arts” (YATTA) in Dumaguete, “Kasing Sining” in Bohol, “Guang Ming Institute of Performing Arts” in Cebu, and “Lusad Teatro” based on Bantayan Island in Cebu.

Jai Shane Cañete, an award-winning screenplay and a native of Santa Fe town on Bantayan Island, will serve as an overall head writer and script director while Nikki Cimafranca from Dumaguete City will be show’s artistic director.

Each province’s story will have its own writer and director.

“Sigbin” will kick off in Dumaguete City, Negros Oriental on October 6. The story is written by Aldrian Baruc and to be helmed by Mellard Manogura. Actors from Dumaguete City include Justine Dumalogdog, Krystelle Rei Banogon, Dan Kevin Folio, and Lance Michael Billedo.

Next stop will be in Tagbilaran City, Bohol on October 12. This is written by Daveson Torculas and directed by Mitch Aguilar. To headline from the Bohol province’s story are Rodda Michela Naraga, Nicole Lorenz Marie Apipe, Paolo Javier Requilme, and Angelo Inguito.