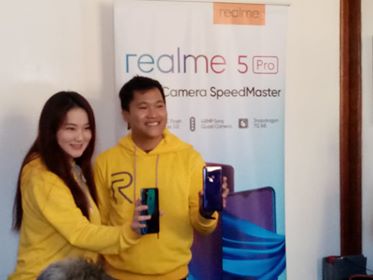 CEBU CITY, Philippines — Recognizing the potential of Cebu as a market, Realme now plans to increase its offline presence here.

Eason De Guzman Jr., Realme Philippines marketing lead, disclosed that the company already has seven kiosks in Cebu alone but it plans to open more kiosks and a concept store here within the year.

De Guzman disclosed that Cebu has been ranked as top 8 in terms of sales of Realme units.

The smartphone company considers Cebu as a pivotal market for brands catering to Central Visayas, because of the province’s sustained economic growth.

The company has established 28 stores and four service centers in the Visayas, said De Guzman during the media roundtable held Friday at Circa 1900 in Barangay Lahug, Cebu City on Friday, September 20, 2019.

Meanwhile, Realme Philippines marketing director Austine Huang noted that their market are those aged 24 and below, especially the emerging market for e-sports professionals.

However, Huang explained that their market also include other market segments such as students and those engage in start-up or small enterprises who prefer to have a more affordable smartphone with good features and specifications.

“Filipinos can expect to have more options for smartphones with high-tier features and unmatched performance previously unseen in their respective price segments. This October, we’ll launch yet another disruptive series that deserves a high five,” De Guzman said.

He also announced that they will be launching in the next few weeks the realme 5 Pro, which  introduces quad technology on performance, camera and power.

The realme 5 Pro has an IMX 586 48MP quad-camera setup, including ultra-wide angle, portrait, ultra-macro, rear and front AI lens. It runs on a Snapdragon 712 AIE processor, which combines the effects of the latest Qualcomm upgrades for advanced gaming capabilities and graphics for an overall affordable flagship experience, according to the company statement./elb