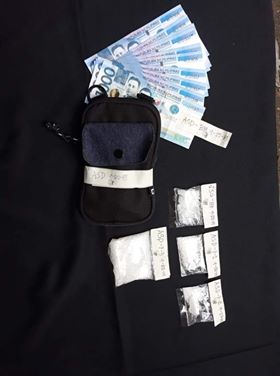 Four packs of suspected shabu and cash used in the drug bust seized from two drug personalties from Ozamis City during a buy-bust operation by the City Intelligence Branch of the Cebu City Police Office in Barangay Tisa, Cebu City on Sept. 22, 2019. | Photo courtesy of CIB-CCPO

CEBU CITY, Philippines — Two persons whom police have described to be known drug personalities from Ozamis City were arrested in a drug bust near a subdivision in Barangay Tisa, Cebu this afternoon, Sunday, September 22.

Gabisan,  who resided in Poblacion Tisa, Barangay Tisa, was caught together with Daroy, who lived in Barangay Kinasang-an, Cebu City, possessing four medium and large plastic packs containing suspected shabu that weighed a total of 40 grams valued at around P272,000.

Police Major Randy Tedio Caballes, chief of the City Intelligence Branch (CIB) of Cebu City Police Office (CCPO), told CDN Digital that concerned citizens alerted them about the presence of the two men in the city. Placed under surveillance, the two men were found to have been able to dispose up to 200 grams of shabu per week through a network of drug users/peddlers all over Cebu City.

Caballes added that the two suspects confessed that they moved out from Ozamis and transferred their operation to Cebu City because they were being chased by the authorities in that area.

Caballes said the two men were found to have been residing in Cebu for about a year and it came as no surprise that they had built a drug peddling network.

The two are now held at the Labangon Police station detention facility pending the filing of charges against them for violation of the Comprehensive Dangerous Drugs Act.

Caballes said they still have to conduct a follow-up investigation to verify reports that the two men are members of a big-time drug syndicate operating in Cebu City./elb