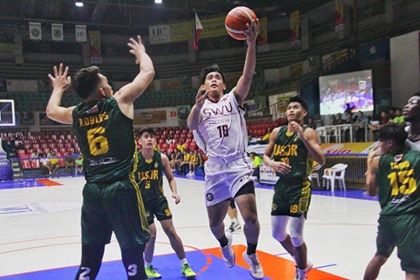 CEBU CITY, Philippines – The Southwestern University (SWU) Phinma Cobras is delighted that they were able to bounce back at the expense of the University of San Jose Recletos (USJ-R) Jaguars, 77-59, on Thursday, October 3, 2019 in the Cebu Schools Athletic Foundation Inc. (Cesafi) Basketball Tournament held at the Cebu Coliseum.

(Of course we are happy because we lost two games straight, so we needed to come back. And, we’re frustrated because we really wanted to win against UV but it is what it is, then we lost next to CIT, thus we are happy that we are able to bounce back.)

The win allowed the Cobras to end the first round at second place in a tie with the University of San Carlos (USC) Warriors. Both teams have a win-loss record of four wins and two losses.

(We will be expecting to do our best and that we will not be comfortable of our four wins and two losses because every team that we go up against, they will do their best to beat us because they’re expecting us to be strong.)

A win remains to be elusive for last season’s runner-up, the Jaguars. They ended the first round with a 1-5 card. After winning their first game against Cebu Institute of Technology University (CIT-U) Wildcats, 72-67, last August 31, they have lost their next five straight games.

After showing their old form when they forced an overtime against the University of Southern Philippines Foundation (USPF) Panthers last September 28, the Jaguars reverted to their lackluster performance allowing the Cobras to take control of the game from start to finish.

Prior to the collegiate game between Cobras and Panthers, the University of the Visayas (UV) Baby Lancers edged the Cebu Eastern College (CEC) Dragons, 54-52, the High School division.