WATCH: 12-year-old girl from Bantayan Island has got some talent in singing 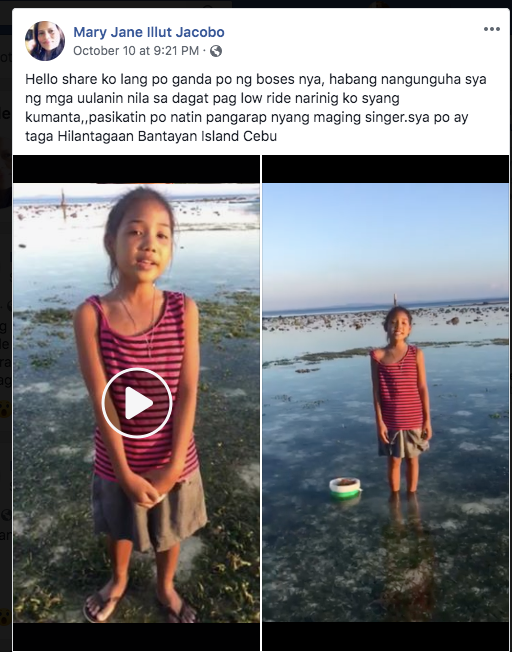 CEBU CITY, Philippines— In old Filipino folklore, they say that when you hear a beautiful voice by the beach, it might be a mermaid singing.

Mary Jane Jacobo did hear a beautiful voice during one of her walks along the shoreline in Bantayan Island but it wasn’t that of an aquatic creature. It was of a cute 12-year-old girl named Dinajane Goducos.

Watch a video of the little girl singing here:

Jacobo, 42, and a native of Bantayan Island, Cebu, shared on her Facebook account last October 10, 2019  videos of Goducos singing while collecting seashells from the sea shore in Hilantagaan, Santa Fe, Bantayan Island.

“I was just walking [along] the beach when I heard a beautiful voice. I saw her, she was singing while collecting seashells and so I went to her and asked to her sing,” says Jacobo.

Jacobo took the videos on September 27. She just recently uploaded the videos since she saw it stored in her phone while she was deleting some pictures and videos.

“I uploaded the videos because I want to help her get known to everyone because she has the talent. I was hoping that by uploading the video, I can help her get discovered,” she added.

Here’s the other video:

We sure hope you sing more often and let your voice be heard, Dinajane! /bmjo