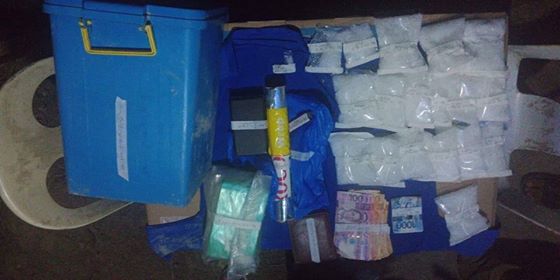 Police Colonel Julian Entoma,  director of the Negros Oriental Provincial Police Office ( NOPPO), said the suspect, Denaquiel Aran Ciano alias “Jun,” 42, was nabbed with a one and half kilograms of shabu that carried a market value of P10.2 million.

Entoma  said Ciano was in the  high value target (HVT)  list of the Police Regional Office in Central Visayas (PRO-7) and has been under surveillance for sometime before police raided his house in Monday night.

According to Entoma, the arrest of the suspect is a result of a follow-up operation by the joint police and Philippine Drug Enforcement Agency ( PDEA)-Negros Oriental led by Lt. Col. Wilfredo Alarcon, the former Provincial Intelligence Branch chief who now heads the Dumaguete City police,  after two drug personalities were earlier arrested in city.

Entoma added that Ciano is considered as “ middle level bodegero.”

(That amount of drugs showed he was the one who kept the bigger stash and that small pushers buy from him.)

Entoma believed that the confiscated illegal drugs were intended for distribution during the All Saints Day and All Soul’s Days holidays on November 1 and 2. /elb