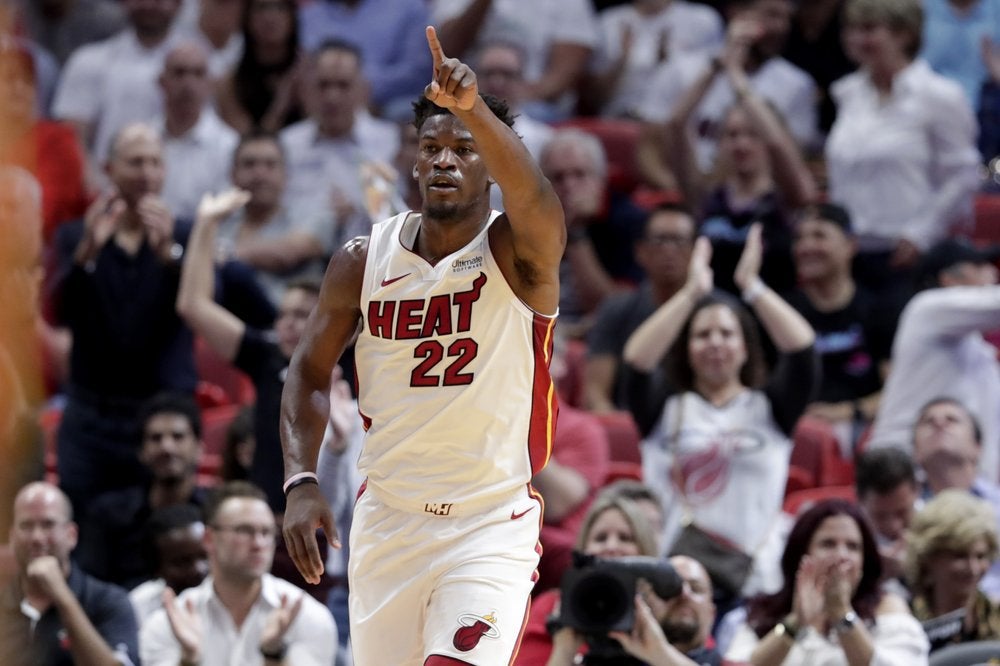 Miami Heat forward Jimmy Butler (22) reacts after scoring during the first half of the team’s NBA basketball game against the Atlanta Hawks, Tuesday, Oct. 29, 2019, in Miami. | AP Photo/Lynne Sladky

MIAMI — Jimmy Butler made his first four shots and scored 21 in his Miami debut, rookie Tyler Herro scored 29 and the Heat defeated Atlanta 112-97 on Tuesday night (Wednesday morning, October 30, 2019, Philippine time) in a game where Hawks star Trae Young left early in the second quarter with a sprained right ankle.

The 19-year-old Herro had a 19-point second quarter for Miami, while fellow reserve Goran Dragic scored 21. Bam Adebayo had 17 points and 10 rebounds for Miami and Kendrick Nunn finished with 17..

Young left with 9:56 remaining in the first half, turning his ankle when he landed on the foot of Miami’s Justise Winslow. The reigning Eastern Conference player of the week — who had 102 points in Atlanta’s first three games — finished with five points in 11 minutes.

John Collins scored 30 for Atlanta, including a career-best five 3-pointers, and Jabari Parker finished with 12 for the Hawks.

Butler missed the first three games of the season while celebrating the birth of his daughter Rylee. He was 5 for 11 from the floor, and went 10 for 15 from the line. As a team, Miami was 33 for 45 from the line — compared with 16 for 24 by Atlanta at the stripe.

“To win at home, in front of these fans, is special,” Butler said.

Even without Young, even with Kevin Huerter — a starter last season — on a minutes restriction while he works his way back off knee soreness and with Evan Turner out with a sore Achilles, the Hawks still wouldn’t go away late. Tyrone Wallace made a pair of free throws to get Atlanta within 11 with 3:24 left, but the Hawks missed shots at the rim on their next two possessions and Miami put the game away.

Herro set a Heat record for points off the bench by a rookie, topping the mark of 28 set by Michael Beasley on March 4, 2009. And Herro and Dragic became the ninth Heat duo all-time to have 20-point games off the Miami bench on the same night.