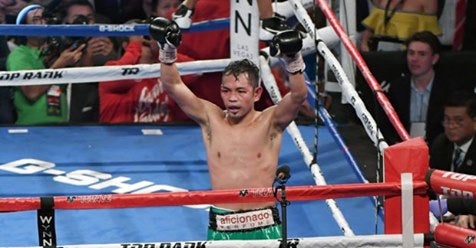 Nonito Donaire is used to being the favorite whenever he steps into the ring.

Now, the 2012 Fighter of the Year and four-division champion will be treading new ground when he faces Japanese pound-for-pound boss Naoya Inoue, who has earned the nickname “Monster,” on Nov. 7, in Saitama, Japan.

But the 36-year-old Donaire doesn’t mind.

“I’m just very excited. I don’t see myself with any disadvantages going to the finals,” said Donaire, who holds a record of 40-5 with 26 knockout wins.

“Fighting one of the world’s best boxers who has grown to be a monster is a big motivation,” he added of his 26-year-old foe, who has won all 18 of his fights including 16 via KO.

They fight for the World Boxing Super Series bantamweight championship and the Muhammad Ali trophy that goes with it.

Donaire is trying to put up a glorious finish to a sterling career that lost its luster since he dropped his sharp, methodical style in favor of an instant, one-punch KO.

One thing going for Donaire is his decision to bring back his father, Nonito Sr., to his corner.

Together they scored spectacular wins that put Donaire in the global stage.

“I will give everything I have to win and I believe I can do it,” Donaire said. “It has been predicted that the keys to the fight are speed and power and the one who makes a mistake first will lose.”

Both their fighting styles point to a spectacular fight, something Donaire has been familiar with through the years, both in scoring highlight reel victories and crushing defeats.