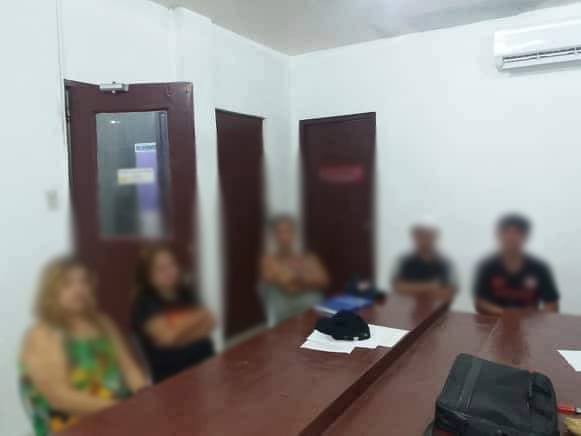 Complaints for the trafficking of women are now being prepared by Talisay City police against five individuals whom they arrested at dawn today, November 17, 2019. | Contributed Photo

CEBU CITY, Philippines–Women who often a videoke bar in Talisay City offer sex mostly to construction workers in the area for a fee of only P150.

Pelare said they also rescued eight women aged between 20 to 37-years-old from the videoke bar located in Sitio Sangi in Barangay Tabunok.

But they spared the owner of the videoke bar from arrest after they failed to find proof on his involvement in the prostitution of the women.

Still, Pelare said they will continue to monitor activities at the videoke bar to make sure that the prostitution of women will not happen again.

He said that the women were turned over to the Department of Social Welfare and Development (DSWD) for counselling before they will be allowed to return to their respective homes.

The police chief said that they have been getting reports on the illegal activities happening at the videoke bar, which they placed under surveillance for at least two weeks.

Pelare said they immediately acted on the prostitution reports well aware of the possible proliferation of sexually transmitted disease between the prostituted women and their costumers.

During their surveillance, Pelare said they observed that the pimps would bring women whom they would offer to construction workers in the area.  The women would then go out with their male customers for sex for a fee of only P150.

Pelare said they are now preparing complaints for the violation of Republic Act 9208 or the Anti-trafficking in Persons Act which they will file against the five pimps on Monday, Nov. 18. / dcb