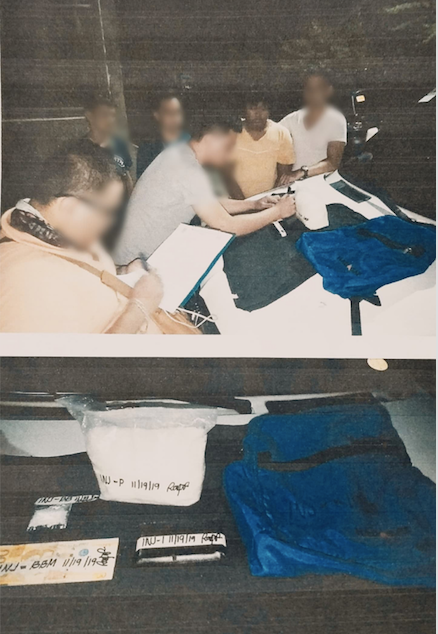 Romjol Diaz, (top photo, second from right) is caught with more than a kilo of suspected shabu during a buy-bust operation by Cebu City police officers. Above photo is the pack of illegal drugs taken from Diaz.| Contributed photo

Police Lieutenant Colonel Frankie Jingle Lugo, CDEU head, told CDN Digital in an interview that they confiscated more than a kilo or 1,105 grams of suspected shabu from Diaz.

Lugo said that the suspected shabu confiscated from Diaz had a Dangerous Drugs Board value of P7.5 million.

He said that they placed Diaz under surveillance for a month after they received reports about his alleged illegal activities.

He said that they had classified Diaz as a high-value target after they found out that he could dispose more than 200 grams of suspected shabu in a week.

Lugo said that Diaz later revealed his boss, who was inside the city jail and who had allegedly entrusted him with the illegal drugs that would later be collected by drug dealers.

The CDEU chief said that with the information from Diaz, they had identified Diaz boss and the drug dealers, who collected the illegal drugs from Diaz.

Police Captain Renz Talosig, Minglanilla Police Station chief, said that the suspected shabu taken from Apor during the past 3 a.m. of November 20 buy-bust operation had an estimated DDB value of P2.2 million.

Talosig said that they also found out that Apor was not from Cebu and that he originally came from Mindanao and that he was classified as a high-value target.

He said that they were also investigating if Apor belonged to a group of drug syndicates operating in Cebu City.

Charges of possession and peddling of illegal drugs will be filed against the two suspects./dbs