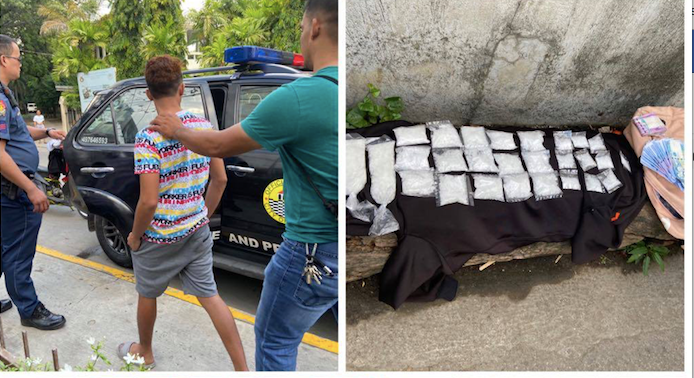 Police escort the teenager, who was caught with P4.9 million worth of suspected shabu during a buy-bust operation in Barangay Kasambagan in Cebu City at past 1 p.m. of November 19. | Contributed photo — Abellana Police station

CEBU CITY, Philippines — At least P6 million worth of suspected shabu were confiscated from four suspects, including two male minors, who were arrested in the separate buy-bust operations of the Abellana Police Station from dawn to Tuesday afternoon on November 19, 2019.

The latest operation was conducted along the Queens Road, Barangay Kamputhaw, Cebu City around 1:30 in the afternoon today, which resulted into the arrest of a 17-year-old boy from Sitio Silangan 1, Barangay Tinago.

Police Major Elisandro Quijano, chief of the Abellana Police Station, said that the boy was listed as a high-value target drug personality in Cebu City.

There were 18 large packs of suspected shabu confiscated from the minor, which has an estimated weight of 723 grams and a dangerous drugs board (DDB) value of P4.9 million.

According to Quijano, the arrest of the minor was a result of the followup operation from their previous arrested high-value target identified as Jake Purisima Seno, 24, from Sitio Kalinao Barangay Barrio Luz.

Purisima was arrested along General Maxilom Avenue in Barangay Kamputhaw with 200 grams of suspected shabu with a DDB value of P1.9 million.

Before the arrest of Purisima, the authorities were able to arrest a 41-year-old woman along M. Velez Street Barangay Capitol Site at past six in the morning.

The suspect was identified as Geronimo Susada Laluna from Banawa Barangay Guadalupe.

A sachet of illegal drugs with a DDB value of P6,000, were found from Laluna’s possession.

The very first operation happened at around 2 a.m. today, November 19, where a 17-years-old boy in Barangay Villagonzalo 1, Cebu City, was caught in possession of illegal drugs worth P2,000.

Quijano said they would check if the four persons arrested belonged to a drug syndicate operating in Cebu.

As of this writing, Laluna and Purisima were detained at the Abellana Police Station detention cell while the two minors were turned over to the Operation Second Chance where the children in conflict with the law were housed.

A violation against section 5 and 11 of Republic Act 9165 or the peddling and possession of illegal drugs, will be filed against the four arrested people./dbs