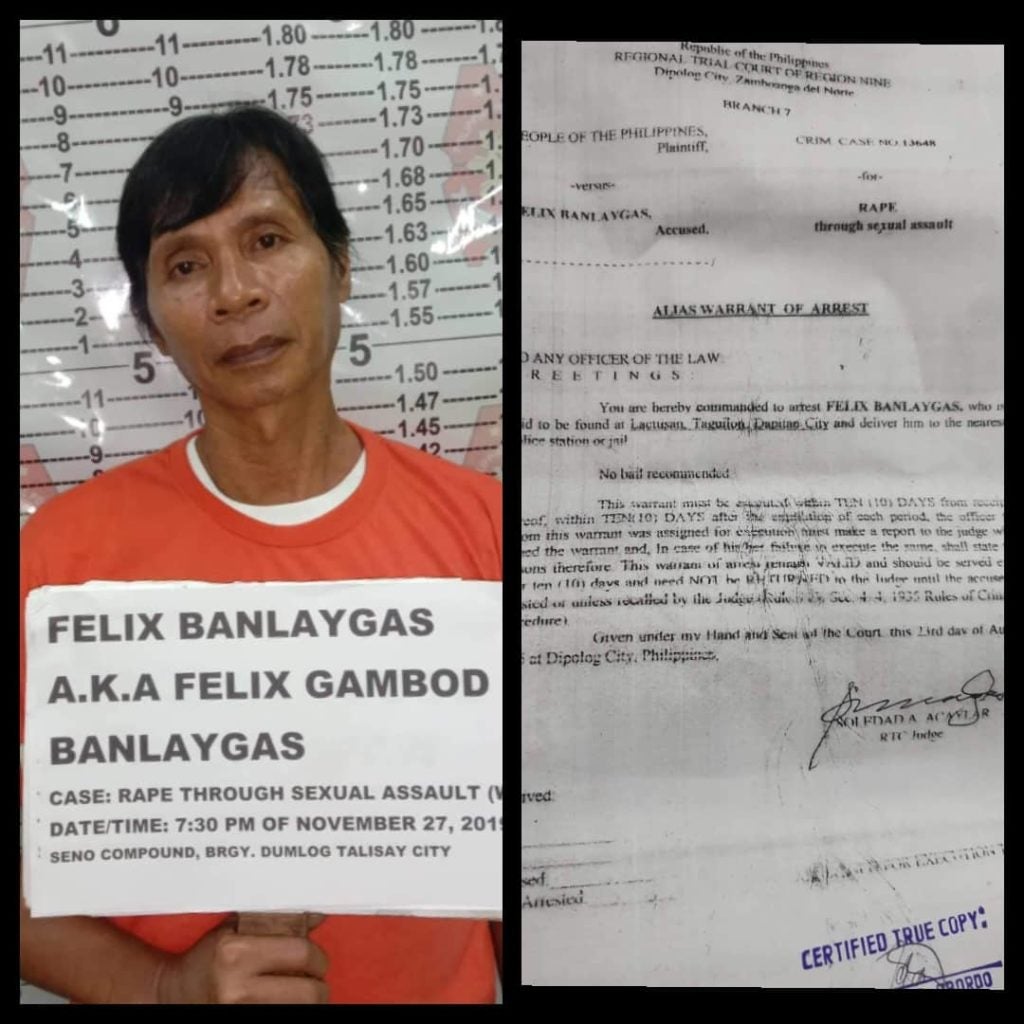 A 55-year-old man with a pending case of rape through sexual assault and eluded arrest for 13 years, was caught by the Provincial Police Intelligence Branch (PIB) of the Cebu Police Provincial Office (CPPO) in Barangay Dumlog, Talisay City, Cebu at 7:30 p.m. on Wednesday, November 27, 2019. | Contributed Photo

CEBU CITY, Philippines — It took more than a decade for police to finally arrest a 55-year-old man, who was wanted in Zamboanga del Norte allegedly for raping a 13-year-old girl in 2005.

Felix Banlaygas did not resist arrest when police officers of the Provincial Intelligence Branch (PIB) of the Cebu Provincial Police Office ( CPPO) served the arrest warrant to Banlaygas in Talisay City on November 27, 2016.

Police Colonel Marlu Conag, PIB chief,  said that PIB agents arrested Banlaygas inside the home of his relative in Barangay Dumlog, Talisay City in southern Cebu at past 7 p.m.

Conag said that they served the warrant of arrest after they had verified Banlaygas’ whereabouts.

According to PIB agents, they received the warrant of arrest of Banlaygas this year and was able to verify that he had been staying in Cebu last July.

This November, after receiving reports from their intelligence monitoring, the PIB agents were able to trace him to Talisay City where he worked as a construction worker, caretaker and dealer of fighting cocks.

According to Conag, Banlaygas was facing a rape case filed last 2005 for allegedly assaulting a 13-year-old girl.

Banlaygas allegedly attended the hearings in 2005, but in 2006, he left his hometown in Zamboanga del Norte and has since gone into hiding in Cebu.

Conag said that they were just waiting for police officers from Banlaygas’ hometown to escort him back to Zamboanga del Norte. | dbs

Read Next
Policeman killed in the school campus grenade explosion hailed a hero: number of injured rose to 16