Typhoon halts nearly half of SEA Games events, but not PH gold rush 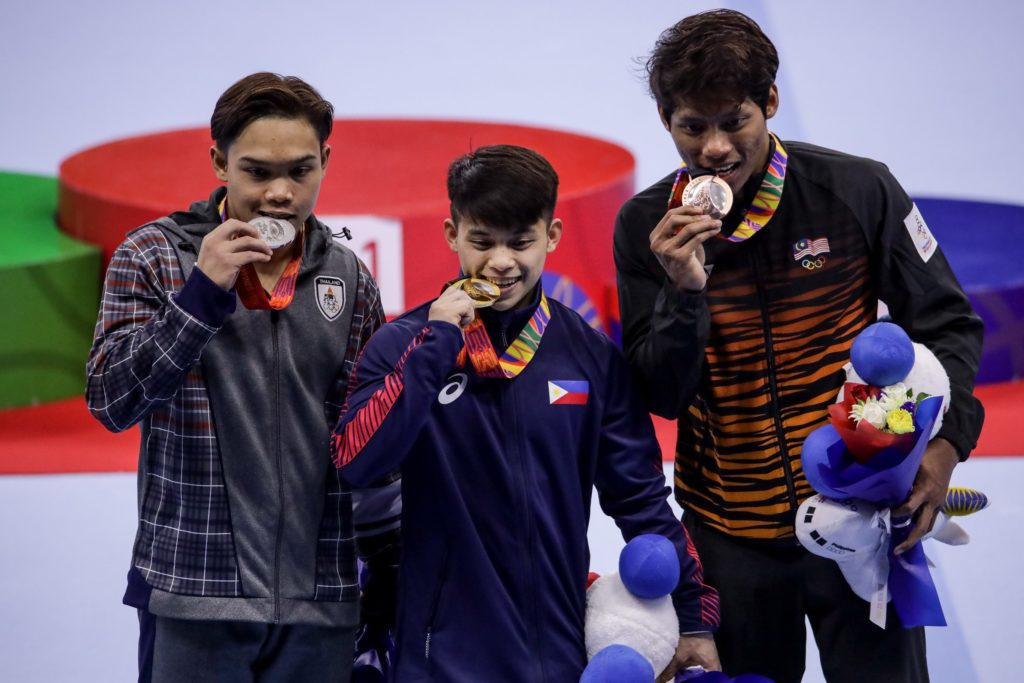 Carlos Yulo bags the gold for the philippines in Men’s Gymnastics floor exercise in the 2019 SEA Games in Manila.

Typhoon “Tisoy” (international name: Kammuri) not only pounded a huge part of central Philippines on Tuesday but also forced organizers of the 30th Southeast Asian Games to suspend almost half of the events scheduled for the day.

Where games went on as scheduled, the Philippine gold medal machine did not let up one bit with world-class gymnast Carlos Yulo again dominating his pet event, wushu contributing heavily, and arnis capping a swashbuckling performance with two more wins to become the most prolific sport for the Filipinos in what is turning out to be their unmolested run for the overall title.

Agatha Wong got the Philippines off to a flying Day 3 start, winning the women’s taolu taijijian with a score of 9.65 and her second gold medal and touching off a six-gold drive by Filipino wushu bets as the Philippines went into the fourth day of skirmishes holding a 47-gold, 30-silver and 16-bronze tally as of 7 p.m. on Tuesday.

That’s a clear 25 gold medals ahead of second-running Vietnam, which is looming to be the biggest threat to the Filipinos in the overall race with perennial power Thailand hobbling in sixth spot with just seven gold medals to show.

Malaysia, the 2017 host, is eight gold medals farther adrift, with Indonesia in fourth with 12. For their efforts, the arnis athletes got a trip to Hong Kong Disneyland, courtesy of federation president Sen. Juan Miguel Zubiri, who wanted them to “be kids again” after training so hard for the Games.

Wong, who also ruled the taijiquan event on Monday, is looking forward to spending the holidays in relaxed mode.

“I’ll hibernate,” she told reporters smilingly at World Trade Center. “I went through a lot this year, though I don’t think I met my own expectations. But results-wise, I’m just so happy.”

The National Disaster Risk Reduction and Management Council (NDRRMC) has cited a protocol for the cancellation of events in the SEA Games. With the weather expected to improve on Wednesday, Team Philippines goes back to work with its pugs, led by the veteran Josie Gabuco, opening their bids at Philippine International Convention Center in Pasay.

Featherweight Nesthy Petecio, who won the Aiba Women’s World Championship in Russia two months ago, and Eumir Marcial are regarded as the brightest gold medal prospects for the Philippines. They will see action on Friday in the semifinals of their respective divisions.

Golf, which brought the country its biggest surprise in Jakarta last year in the Asian Games with a sweep of the individual and team events of the women’s division, tees off at Luisita in Tarlac where Bianca Pagdanganan, LK Go and SEA Games rookie Abegail Arevalo suiting up.

There will be no Yuka Saso for the Philippines this time, with the long-hitting Filipino-Japanese trying her luck in the lucrative Japan Ladies Tour.

But Pagdanganan, who won bronze in the Asiad and who is bound for the US LPGA, Go, who is a member of that winning team, and Arevalo, a standout of the San Jose University program in the United States, are up to the task.

“We have our eyes on the prize,” Arevalo told the Inquirer after the trio was able to sneak in a practice round on Tuesday morning before bad weather came early afternoon. “We’re all excited to play and represent the country well.”

World No. 1 amateur Atthaya Thitikul, the charming spearhead of perennial favorite Thailand, is one of the players to watch in the event even as Luis Miguel Castro, Aidric Jose Chan, Sean Jean Ramos and Carlo Jano Corpus represent the country in the men’s event where the Thais are also the solid favorites.

Team Philippines had its women’s volleyball team starting off on the wrong foot, with the Nationals taking a heart-rending 21-25, 25-23, 25-19, 20-25, 15-8 loss at the hands of Vietnam that would make their quest for a medal a truly formidable one.

Yulo, the 19-year-old phenom whose family lives a few blocks from the Rizal Memorial Coliseum where gymnastics is being held, was a sight to behold when he performed in the floor exercise—the event closest to his heart and which made him famous after he triumphed in the World Championship in Stuttgart in Germany last October.

Trained in Japan by a Japanese coach for the last two years after his potential was unearthed, Yulo was a class by himself, tallying 14.700 points to easily dethrone compatriot Reyland Capellan—the SEA Games king the last two editions—who managed just 13.433 points.

Tikomporn Surintornta of Thailand actually came in second with a score of 13.833, while Zur Bahrin Mat Asri of Malaysia bagged the bronze with 13.767. Capellan, because of a faulty dismount, slipped to fifth.

Yulo missed out on a third gold when he settled for the silver in the still rings, an event where he was the favorite, with an effort of 13.733. It was also his second silver in these Games after his pommel horse hardware which came earlier on Tuesday. Vietnam’s Nam Dang took the gold with a score of 13.867.

“I’m not satisfied,” Yulo said of the two silver medal finishes. “I have been performing better in training. But I am still happy, because I wasn’t really expecting anything.”

The 19-year-old from Leveriza Street still will compete in the vault, horizontal bars and parallel bars events on Wednesday for a chance to close out his SEA Games stint to remember on a truly smashing note.

Read Next
The power of connecting: I was clueless (Part 1)