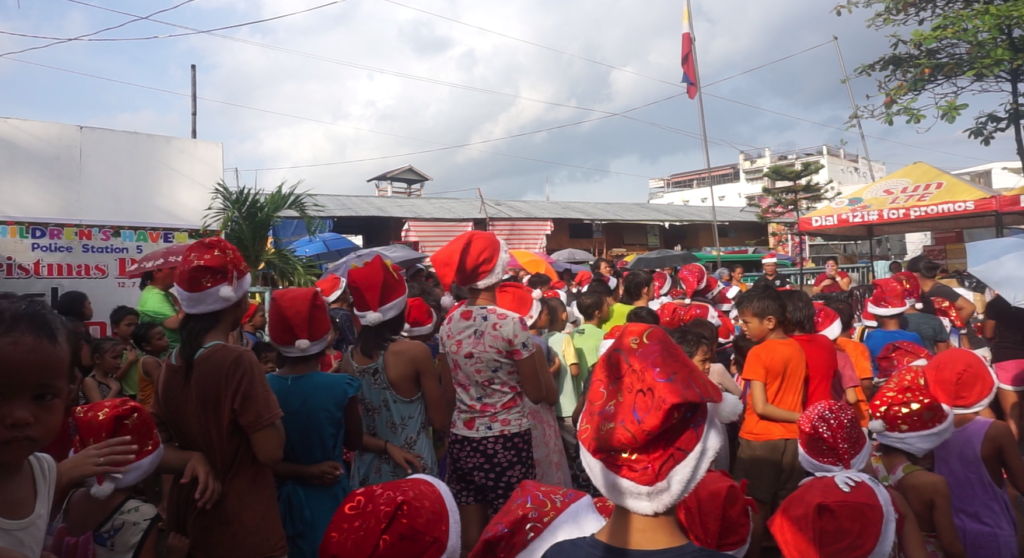 Before the Christmas Party at Police Station 5, the children pay their respect to the Philippine flag as they sing  the Philippine National Anthem | Gerard Francisco

CEBU CITY, Philippines — It was a Saturday and Dodong, 14, was already up as early as 6 a.m.

And no, he was not headed for school.

Children’s Haven is a program organized by the Carbon Police Station and some private sector partners where they gather minors, who loiter at the vicinity of the Carbon Public Market .

The program aims to teach these street children Good Manners and Right Conduct (GMC), reading and writing, and serve them free meals.

The project has been going on since September 14 or shortly after Police Captain Alvin Arsula Llamedo assumed his post as chief of Carbon Police Station.

For Dodong, who is also from Barangay Ermita, December 7 was an extra special day, because he was attending the Children’s Haven Christmas Party. 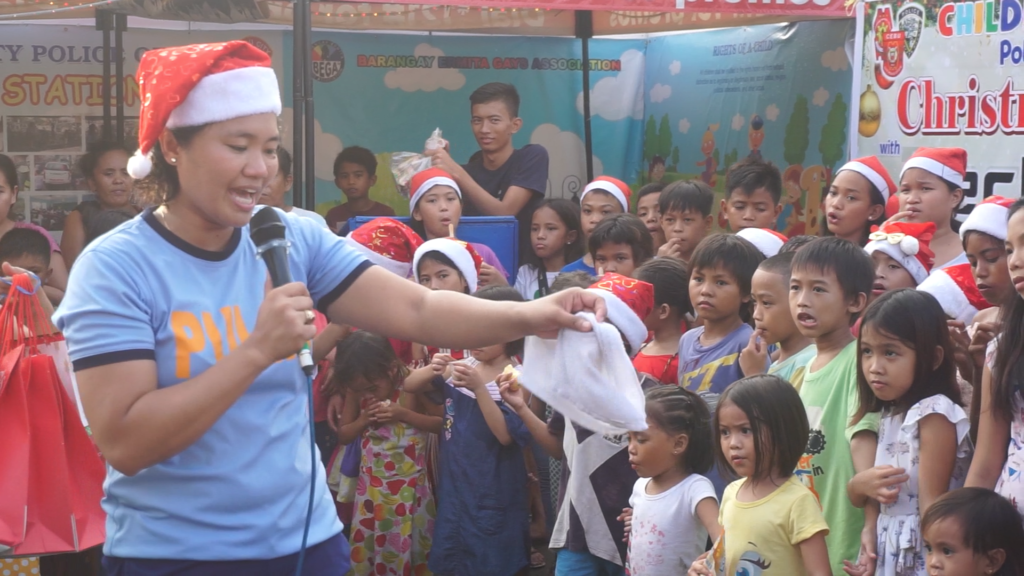 Police officers of Police Station 5 or the Carbon Police Station gave presents to around 150 street children during the Children’s Haven’s Christmas party on December 7. |Gerard Francisco

Police Master Sergeant Marissa Ortega Manubag of the Women and Children’s Protection Desk (WCPD) of the Carbon Police Station said that they organized the Christmas party so that they let these children experience what celebrating Christmas was all about.

(We want the street children to experience what it is to celebrate Christmas. We would like them experience how it feels to be given Christmas gifts.)

Manubag said that some of these children had no longer any parents or were living with relatives or had been neglected by their parents, who might be busy with their jobs or busy looking for jobs.

She said others, however, came from a family with jobless parents.

She said these were the children that they wanted to help and so the Children’s Haven program was created last September 14.

For Dodong, who is a Grade 7 student of Abellana National High School, and was overwhelmed by the gifts he had received, said one of his Christmas wishes would be for the Children’s Haven to continue.

(They have helped a lot of children.)

Dodong was one of them. 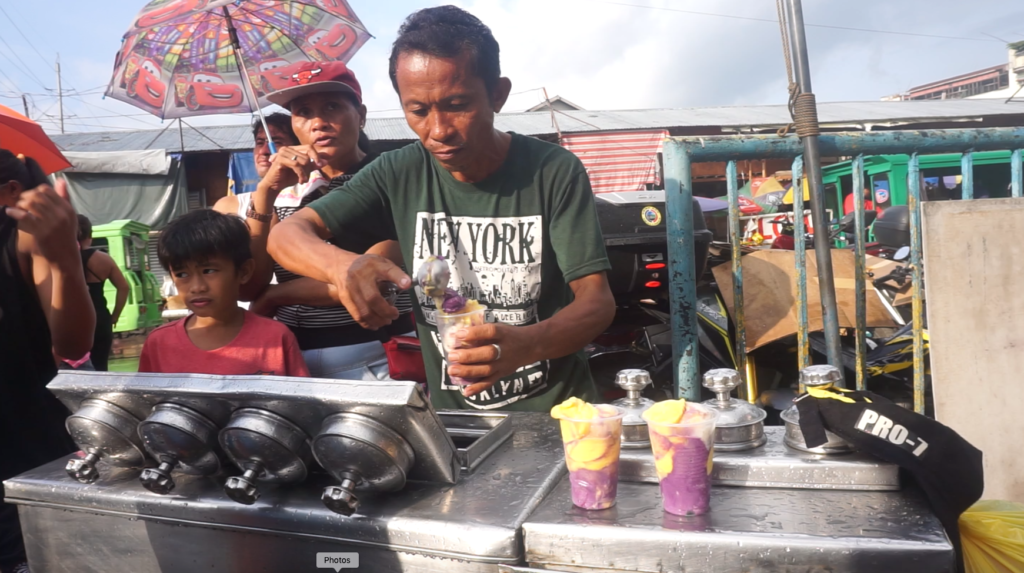 The life of Dodong changed drastically after his mother died in 2017, and then his father left him in the care of his then 63-year-old grandmother, whose only livelihood was selling vegetables and fruits in the Carbon Public Market.

Today, Dodong said his father now had another family.

Because of their situation, Dodong’s grandmother asked him to stop schooling this year and to help her instead in the market.

So he had no choice but to heed his grandmother’s appeal and did not enroll himself for Grade 7 in June.

Since Dodong’s grandmother’s house was only at the back of the police station, it was in July this year that Police Captain Llamedo noticed him as he would pass by the station daily to go to the Carbon public market to help his grandmother.

Curious about this kid, he asked him why he was not at school and that was when he learned about Dodong’s situation.

Llamedo, who was touched by what Dodong had gone through, decided to help him. The police chief talked to Dodong’s grandmother and convinced her to allow Dodong to continue going to school.

But it was July and school has already started for more than a month, so Llamedo appealed to the school management to allow Dodong to attend school.

Dodong has since diligently attended school.

Now, he can dream to be a pilot as he sees the promise of a future.

(I would like to finish my studies and become a pilot.)

In exchange for shouldering his educational expenses, Llamedo asked Dodong to visit the police station during his free time, where Llamedo could ask  him to do simple errands.

Llamedo said this was also a way to get Dodong off the streets of Carbon — that instead of loitering around the area with other street children, he would have a place to stay away from trouble. 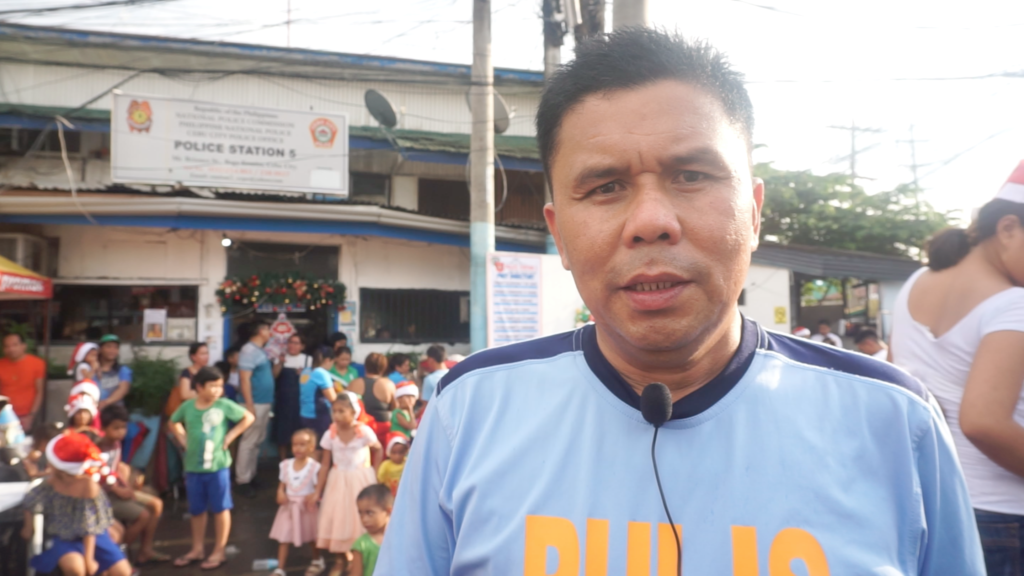 Police Captain Alvin Arsula Llamedo, Carbon Police Station 5 chief, says he helped create the Children’s Haven program to teach street children of the Carbon area to respect the law and to help get them off the streets. | Gerard Francisco

After seeing the situation of Dodong and several other street children in the area, the police chief thought about how to help keep these children out of the Carbon streets and away from committing petty crimes.

So he decided to push through with an idea of gathering children in the Carbon Police Station and teaching them the importance of following the law and having them learn Good Manners and Right Conduct.

“Some of them were involved sa mga petty crimes, so I decided nga mag mugna ko og programa nga madivert sila from the street to the police station,” said Llamedo.

So he worked to have this Children’s Haven program, and it was realized in September this year.

Llamedo said they started the Children’s Haven with the sole intention of teaching children, who were often seen at the vicinity of the Carbon Public Market in Barangay Ermita, the need to respect existing laws to make them good citizens of the country.

The program was later expanded to already include coaching in reading and writing.  There were also those whom they helped send to school, he added.

In order to sustain their operations, Llamedo said that they are getting help from members of the Station 5 Police Advisory Council and some private sector partners.

Police Master Sergeant Manubag, who is in charge of the Children’s Haven project, said they already completed a total of 11 sessions with the children and saw how their program had helped improve their lives.

For Dodong and those who have regularly attended the Children’s Haven sessions, they have learned a lot.

Llamedo said at first, the street children did not know how to wash their hands when they would eat their food.

(At first, there were others, who would fight over the free food. But today, these children would pray before they eat.) 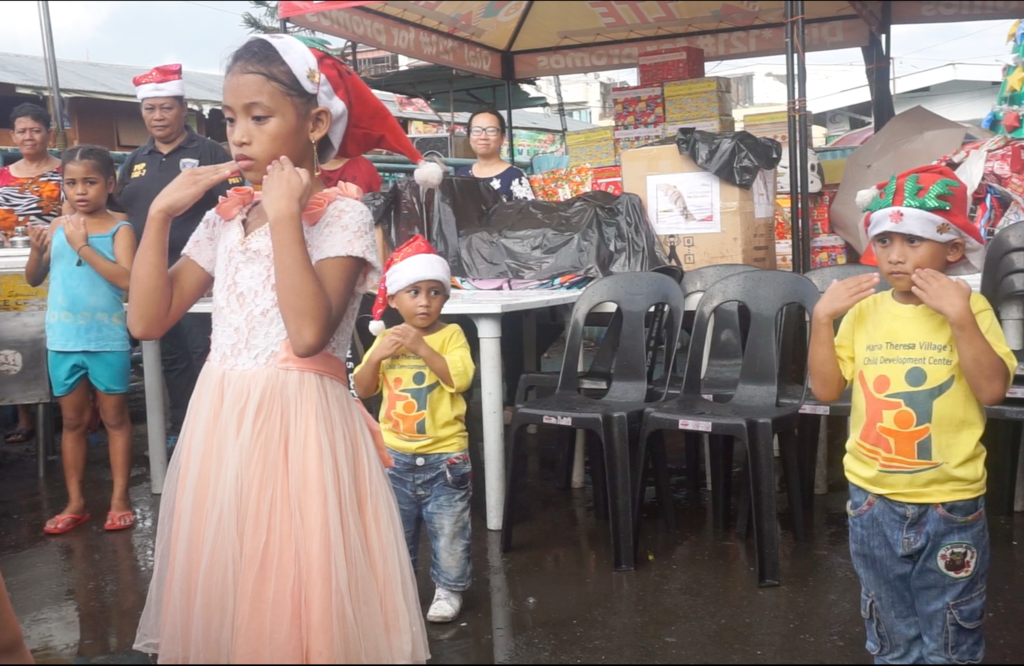 Groups of street children, who joined the December 7 Children’s Haven Christmas Party in front of the Carbon Police Station, perform a dance number at the event. | Gerard Francisco

On the Children’s Haven’s Christmas party on December 7, when Dodong arrived at the police station, even before he entered it he already smelled the snack food on the table — hamburgers, chicken lollipops, popcorn, rice porridge and ice cream.

Aside from that he also saw the piles of gifts that were placed on one of the tables at the corner of the station and Christmas songs were played on the background.

The Christmas program started with the more than 150 children lining up in front of the station where they first sang and danced to a Don Moen song “Give Thanks” as their prayer to kick off the program.

Then groups of children presented dance presentations including Dodong, who grooved to the beat of a Christmas song.

Llamedo said that the children had so much fun that even the rain failed to dampen their enthusiasm to perform their dance numbers at the party.

After the presentations the children get to savor the snacks. Dodong lined up and waited for his turn to get some food and eat.

He also eagerly lined up for his turn to taste the free ice cream.

Then it was the time for the giving of presents to each kid.

Dodong was so thrilled with receiving his gift of school supplies.

Llamedo said that he was happy about the party where they successfully let the children experience the spirit of Christmas./dbs