PDEA-7 to get two incinerators from Cebu City 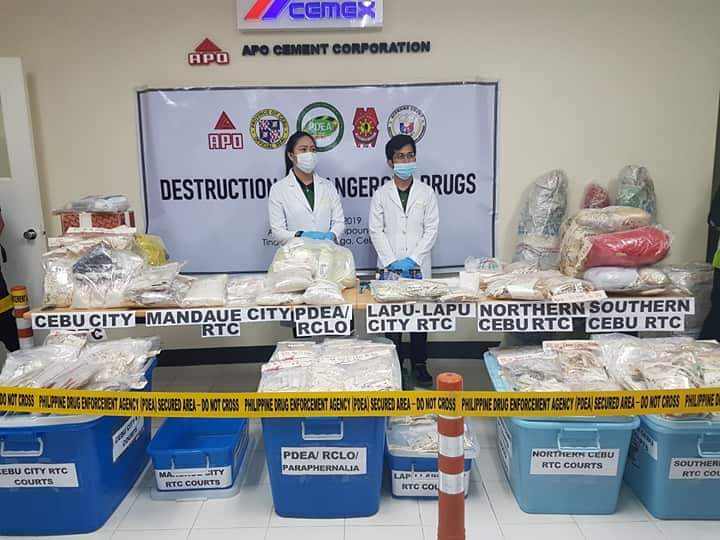 At least 80 kilos of illegal drugs with an estimated dangerous drugs board (DDB) value of P194.2 million, which were confiscated by the Police and Philippine Drug Enforcement Agency in Central Visayas (PDEA-7) operations, were destroyed through thermal destruction on Tuesday, December 10, 2019, at the Apo Cement Compound, Barangay Tina-an, Naga City, Cebu. | CDND Photo / Alven Timtim

This move followed after the Cebu City Council and Mayor Edgardo Labella approved the amount alloted for the incinerators during the regular session on Tuesday, December 10.

The budget will be taken from the Philippine Amusement and Gaming Corporation (PAGCOR) funds of the city for 2019.

Cebu City Councilor Antonio Cuenco has proposed to help the PDEA-7 after they reported to the council during the Citizen’s Hour on October 22, 2019 that the agency does not have the equipment to destroy the drugs that they confiscated in drug busts.

PDEA-7 Director Wardley Getalla said the incineration would cost at least P16, 000 per session regardless of the volume of drugs to be incinerated.

There is no allocation for drug incineration in PDEA’s annual budget because the offender is supposed to shoulder the expenses.

In the history of PDEA-7, no offender spent money for the destruction of the drugs.

This is why PDEA-7 had to find other ways to ensure the proper disposal of the illegal drugs.

This is the reason why the agency can only afford to destroy illegal drugs by bulk. The recent drug incineration happened last Tuesday, December 10, in Naga City.

Mayor Labella said the two incinerators will help PDEA-7 uphold the law, which states that drugs must be destroyed 72 hours after being presented to the court and must receive court clearance for its destruction.

“The city has no problem helping PDEA-7. We have to do our part in the fight against illegal drugs,” he said.

The mayor assured PDEA-7 that the city is ready to help the enforcement agency. / celr