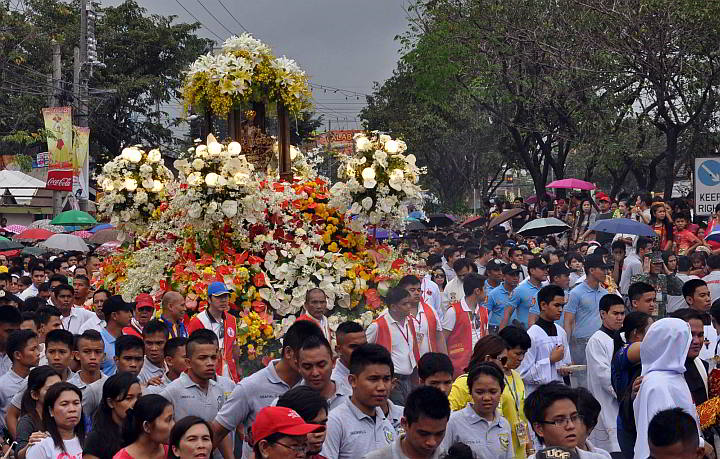 The carroza of the Sto. Nino passes M.J. Cuenco Avenue in Saturday’s foot procession. The feast of the Child Jesus is celebrated today coinciding with the Sinulog Grand Parade and street dancing competition. | CDN file photo

CEBU CITY, Philippines — The Sinulog 2020 solemn procession route will cover a stretch of 6.5 kilometers and the procession is expected to be completed in six hours.

The Cebu City Police Office (CCPO) in coordination with the Cebu City government and the Basilica Minore del Sto. Niño conducted an ocular inspection on the expected route of the solemn procession.

Councilor David Tumulak, the chairman of the executive committee of the Sinulog Foundation Incorporated (SFI), said they identified problems that needed to be addressed before the solemn procession.

The carroza of the Sto. Niño may reach up to 20 feet, but some of the wires along the routes have sagged below 20 feet, while branches of some trees also hang at the same height posing danger to the carroza.

Potholes and broken asphalt are also seen on some roads, which can be hazardous to the pilgrims during the procession.

Tumulak said they had asked the Department of Engineering and Public Works (DEPW) to solve these road hazards before the procession on January 18, 2019, at 1 p.m.

Aside from road hazards, Tumulak also said they were encouraging residents along the Sinulog routes not to park their vehicles along the road during the Sinulog procession to avoid obstruction on the road.

The Prevention, Restoration, Order, Beautification, and Enhancement (PROBE) team will also be tasked to ensure that there will be no obstructions in the road.

“It is good that we conducted the inspection weeks before the Sinulog so we can prepare ahead of time. We can address the problems swiftly,” said Tumulak.

Tumulak said the Sinulog route will be ready even before the Sinulog novena masses will begin on January 9, 2020. /dbs