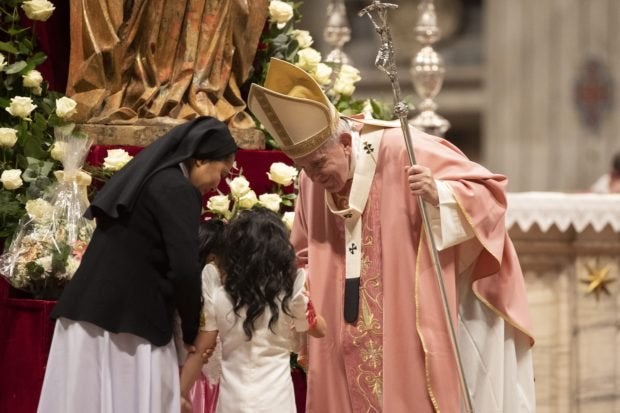 MALIGAYANG PASKO, POPE FRANCIS The Pope greets children after celebrating his first-ever “Simbang Gabi” for the Filipino community in St. Peter’s Basilica at the Vatican on Sunday. –AP

As the traditional dawn masses kicked off in churches in the Philippines on Monday, Pope Francis celebrated the first “Misa de gallo” (dawn Mass) for Rome’s Filipino community at the Vatican.

Cebu Archbishop Jose Palma said this reciprocity by the Vatican showed that the unique culture of faith of Filipinos had inspired Catholics all over the world.

“The Misa de gallo is attractive. It is slowly being introduced by the Filipinos to the world,” Palma said in his homily on the first day of the novena leading to Christmas Day.

The Pope celebrated the Mass on Sunday at St. Peter’s Basilica, according to Vatican News.

“Pope Francis saw the beauty of this local tradition, that is why he officiated his first Misa de gallo,’’ he said.

According to Vatican News, the Pope began his homily by drawing from the liturgy. “From the words of the Responsorial Psalm, we learn that there are those vulnerable people who also deserve a look of special love from God,” he said.

He was referring to “ the oppressed, the hungry, prisoners, foreigners, orphans and widows. These are the inhabitants of the existential peripheries of yesterday and of today.”

As the world prepared to celebrate the mystery of the Incarnation, of Emmanuel, Francis said, “we must ask the Lord to renew the miracle of Christmas every year, offering ourselves as instruments of his merciful love toward the least and the lowest.”

He explained that during the Season of Advent, we are called to “awaken in our hearts a sense of expectation and to intensify our prayer,” said Vatican News.

The Pope noted that “in the Philippines, for centuries, there has been a novena in preparation for a blessed Christmas called Simbang Gabi (Night Mass). During nine days, the Filipino faithful gather in their parishes for a special Eucharistic celebration.”

He continued: “In recent decades, thanks to Filipino migrants, this devotion has crossed national borders and has arrived in many other countries,” including Italy and the Vatican.

Through this celebration, “we want to commit ourselves to manifest God’s love and tenderness toward everyone, especially the least,” he said.

The Pope said that the people who had left their land in search of a better future “have a special mission.”

“Your faith,” he said, “is leaven in the parish communities to which you belong, today. I encourage you to increase opportunities for meeting to share your cultural and spiritual wealth, while at the same time allowing yourselves to be enriched by the experiences of others.”

He said: “We are all called to practice charity together with those who live in the existential peripheries, using our different gifts to renew the signs of the presence of the Kingdom. Together, we are all called to proclaim the Gospel, the Good News of salvation, in all languages, so as to reach as many people as possible.”

In Manila, Cardinal Luis Antonio Tagle on Monday urged the Catholic faithful to be witnesses of Christ and focus on him as Christmas drew near.

“This Christmas, is Jesus the one we’re longing for? It doesn’t seem like it for others. What do we look forward to? Bonus. For some it’s Christmas even without Christ as long as there is bonus. We look forward to do our shopping. We know very well what shops offer discounts. But we do not seem to give much importance to the Gospel,” he said during the first dawn Mass at the Manila Cathedral.

The Manila archbishop encouraged the youth to focus on Christ, especially this Christmas.

“Start now while you are young and do not wait for something to happen in your life before you realize that we need to focus on him. Let’s do it as part of our every day living,” he said.

Read Next
Duterte’s reaction to Monsod’s praise: ‘F*** you!’