24 rescued after motor banca capsizes off the coast of Naga City, Cebu 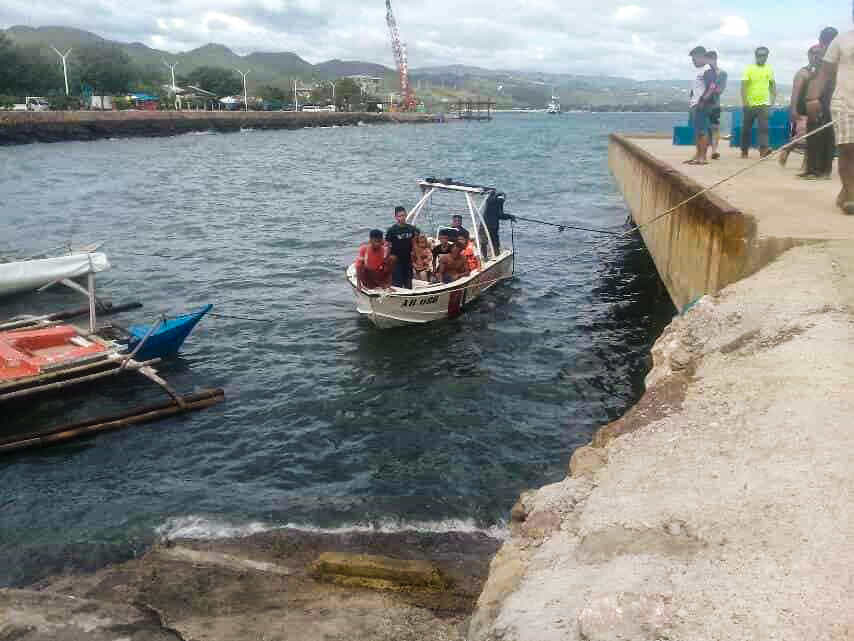 Passengers rescued from a distressed motor banca off the coast of Barangay Tuyan in Naga City on Wednesday morning, January 1, 2020, have already returned to the safety of their homes. | Photo courtesy of the Philippine Coast Guard Naga City Substation

CEBU CITY, Philippines — A family trip on New Year’s Day ended in a disaster after the motor banca which they boarded capsized off the coast of Barangay Tuyan in Naga City in southern Cebu.

But 24 (not 23 as reported earlier) members of the Montero and Villarmea families, which included 13 minors, were lucky to have been immediately rescued by personnel of the Philippine Coast Guard Naga City Substation.

Family members were brought to the safety of the Naga City port.  They have already returned home as of this writing.

Lietuenant Junior Grade Michael John Encina, spokesperson of the PCG in Central Visayas, said that they are now investigating the cause of the accident.

They do not discount the possibility that motor banca Poseidon II was overloaded because its size was only supposed to accommodate 15 passengers.

If proven that the banca was overloaded, its operator Jhonnie Montero may be held liable for the offense, Encina said.

Johhnie denied that his banca was overloaded.

(We were not overloaded because most of our passengers were children. They were small.)

Joel Montero, Jhonnie’s brother, said they left the shorelines of Barangay Tuyan, where they live, at around 11 a.m. on Wednesday, January 1, 2020.  They were headed for the Oceanside Beach in Barangay South Poblacion located around 4.2 kilometers away for a family outing.

Joel said that strong winds and huge waves hit their banca shortly after they left the shorelines of Barangay Tuyan causing it to capsize.

They were lucky that they were just 400 meters away from the PCG Naga City Substation that is also located in Barangay Tuyan, the reason for their immediate rescue.

It took 30 minutes for PCG personnel to retrieve all of the motor banca’s passengers and bring them to the Naga City port, Joel added.

Joel said they were very lucky that no one from among their family members were injured during the incident.

(We noticed that the banca was about to capsize because the most of those who were with us where leaning on one side. The banca did capsize.)

Recto  said that he made sure that his youngest son, who is only two-years-old, will remain afloat while they were on the water.  He knew that his two older children were able to swim.  They learned to swim at an early age since they live on the coastal areas of Barangay Tuyan, he said. / dcb